Maverick Vinales led a Yamaha 1-2 on the penultimate day of MotoGP pre-season testing in Qatar, while Alex Marquez suffered a fractured foot after a crash.

Marquez has had a bruising test so far, crashing four times across the first four days before having a fifth during Thursday’s running.

The LCR rider highsided at the Turn 9 right-hander, which brought out a brief red flag period and resulted in him suffering a small fracture in his foot that ended his day early.

By the end of the first hour of track action, only two riders had set lap times, while Yamaha’s Vinales travelled back and forth from the pitlane to do practice starts.

Ducati test rider Michele Pirro led the timesheets after hour one with a 1m57.345s, with Aprilia’s Aleix Espargaro taking over by the end of the second hour with a 1m54.942s as he carried out the set-up work he couldn’t on Wednesday due to a technical problem.

Petronas SRT’s Franco Morbidelli edged ahead of Espargaro with a 1m54.588s to take over top spot by the end of hour three before Honda’s Pol Espargaro went quicker with a 1m54.103s just over 30 minutes into hour four.

The Honda rider suffered his first crash on the RC213V earlier in the day, but this didn’t stop him from registering over 50 laps as his adaptation to the bike continued.

His brother Aleix returned to top spot about an hour later with the first sub-1m54s lap of the day – the Aprilia rider firing in a 1m53.869s, which he improved shortly afterwards to a 1m53.640s.

With just under two hours of running left, Francesco Bagnaia continued to display Ducati’s Qatar form with a 1m53.444s to go fastest of all.

His time was beaten by Yamaha’s Fabio Quartararo 22 minutes from the chequered flag, the Frenchman moving ahead with a 1m53.398s as he continued working on the 2021 M1 chassis.

With eight minutes to go, Quartararo’s factory Yamaha team-mate Vinales fired in the second-best time of the test with a 1m53.244s, which would go unchallenged to the end of the session.

Vinales – who tried three M1s on Thursday – ended the day 0.079 seconds clear of Morbidelli, who leaped ahead of former team-mate Quartararo in the final few minutes. 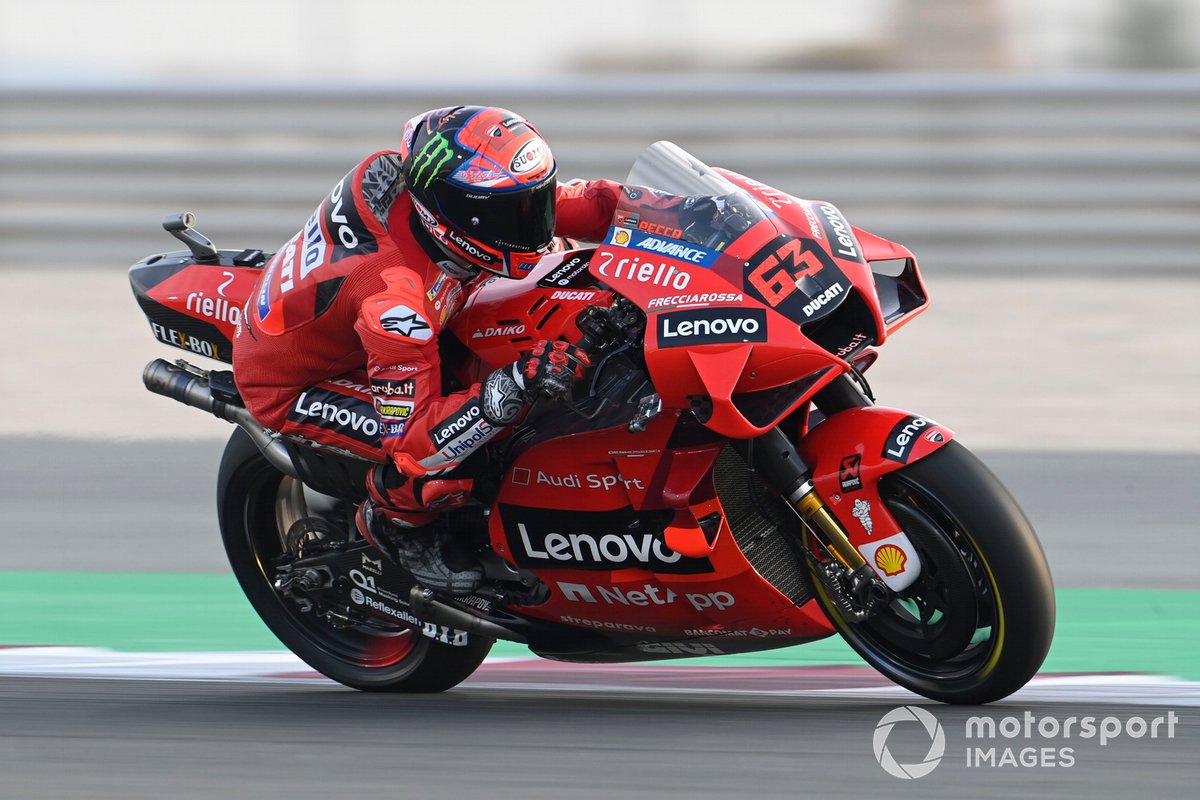 Bagnaia was top Ducati runner having put in a race simulation on the Italian marque’s new aerodynamic fairing, with Aprilia’s Espargaro completing the top five.

The Suzuki duo of reigning world champion Joan Mir and Alex Rins were the last to take to the circuit on Thursday, with the pair completing 37 and 44 laps respectively in sixth and seventh.

SRT’s Valentino Rossi closed the gap to the leaders on Thursday as he tested various things, ending the day 0.759s off the pace in eighth ahead of Pramac’s Johann Zarco, Honda’s Espargaro and overall test pacesetter so far Jack Miller on the factory Ducati.

Pramac’s Jorge Martin – who had a crash while trying the medium front tyre - was top rookie in 14th having done a time attack for the first time, with the Spaniard also putting in a long run.

He headed fellow rookie Enea Bastianini (Avintia), with KTM once again low-key down in 16th with Brad Binder and 18th with Miguel Oliveira, Marquez sandwiching between them.