Franco Morbidelli admits there is a “shadow of frustration” hanging over him having to ride a two-year-old MotoGP bike in 2021 and has had a “frank” discussion with Yamaha.

Despite finishing as top Yamaha rider in 2020 and second overall in the championship, Morbidelli remains on the 2019 ‘A-spec’ M1 he rode last season and has struggled.

Morbidelli was able to get into podium contention in Portugal and claimed third in last weekend’s Spanish Grand Prix, but hasn’t hid his displeasure at not having factory machinery in 2021.

The Petronas SRT rider has discussed the situation with Yamaha and says it “understood” his feelings – with both parties agreeing he was caught “unlucky” by various factors.

“Yeah, I spoke with Lin [Jarvis],” Morbidelli said on Sunday at Jerez.

“I told him my thoughts about the situation and I was really frank with him.

“So, I was unlucky and I hope what luck was taken from me this year is going to be given back somewhere in life.”

When asked by Autosport if his Jerez podium was more satisfying because of this situation or if it was more frustrating given his technical situation, he replied: “This podium feels wonderful and it feels sweeter than usual. 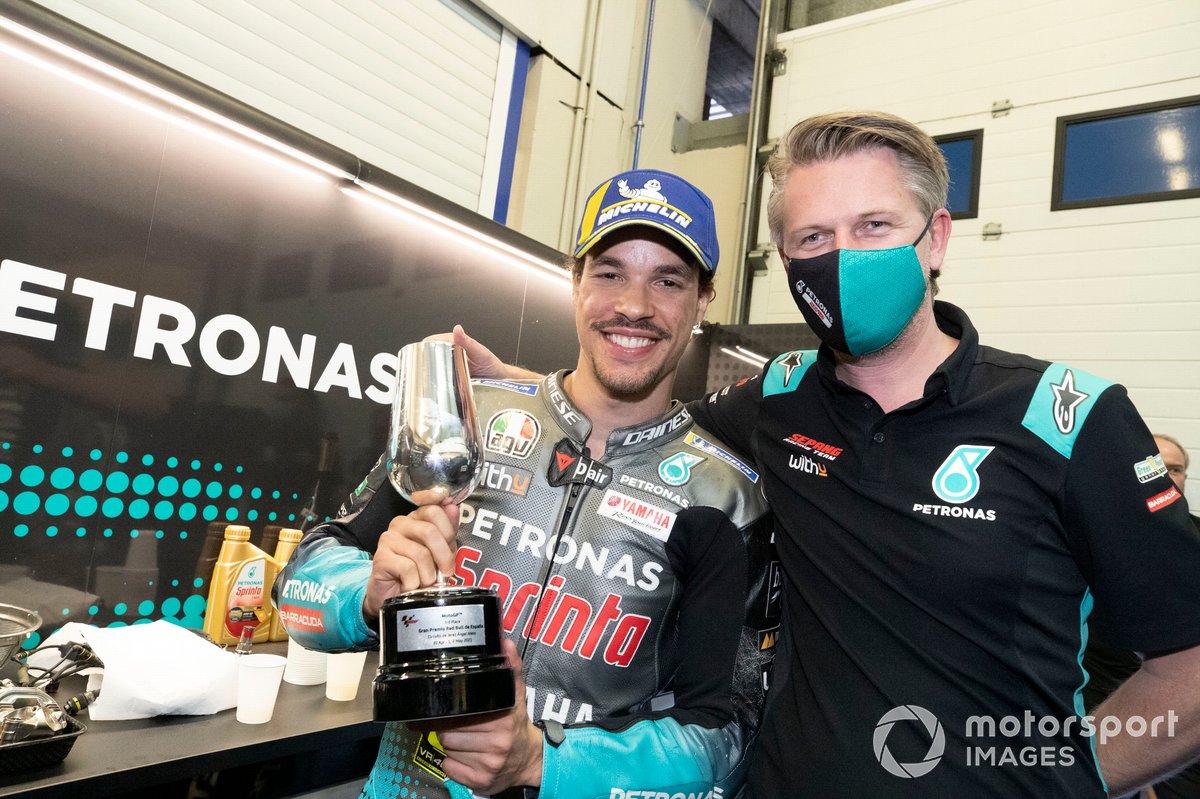 “There is this shadow of frustration around us, that’s for sure.

“But when we manage to make good results we are just happy. I am just happy.”

Vinales too weak on brakes at Jerez

Factory Yamaha rider Maverick Vinales was unable to advance on his grid slot of seventh in the Jerez race as he was too weak on brakes.

The Spaniard was one of three riders to opt for the soft front tyre - which he felt afterwards was still the correct decision - and said he was pleased with his M1 overall, but couldn’t get into the podium fight because “I was not able to brake harder”.

“The soft was a good option for me, honestly I felt good potential on it,” Vinales said.

“Just I couldn’t close enough the gap to Mir and to the guys I had in front. I had good laps at the end of the race but not enough.

“So, it’s something we need to work on. Was a positive race for sure because I felt strong in many, many points on the track.

“But on the other hand, there’s some parts of the track where we need to improve – especially on braking area. I was not able to brake harder and this was my biggest issue.

“The rest was fantastic, the bike was on a really good level. I just wasn’t able to take out the maximum on brakes.”