Ducati’s Jack Miller pipped the Honda of Pol Espargaro by 0.012 seconds in a thrilling-but-crash-strewn second practice for the MotoGP Valencia Grand Prix.

The rain that had affected this morning’s 45-minute session had completely cleared by the time FP2 got underway, with Honda’s Espargaro setting the early pace with a 1m34.510s.

World champion Quartararo’s session was interrupted a little under 10 minutes in when he crashed at Turn 2.

It was a similar incident to that of Bagnaia’s in FP1 at the same place, while the Italian jumped to the top of the order moments after his chief title rival’s crash with a 1m32.379s.

The Ducati rider duly improved on his following tour to a 1m32.248s, which stood as the benchmark for the next 10 minutes.

Yamaha’s Morbidelli – winner of last year’s Valencia GP – guided his factory M1 to a 1m31.832s to head the timesheets into the closing moments when the field went for a soft tyre time attack.

A late salvo of laps once again led to a battle over top spot, with Miller the first to topple Morbidelli’s effort with a 1m31.409s with five minutes to go.

This was quickly beaten by team-mate Bagnaia with a 1m31.400s, before Espargaro guided his Honda to a 1m31.183s while following Miller.

A 1m31.134s put Bagnaia back on top briefly with just over a minute to go, with Miller ending his session with a 1m30.927s to end Friday fastest of all.

But he only just fended off Espargaro by 0.012s, with the Honda rider crashing at Turn 6 on his final flying lap. 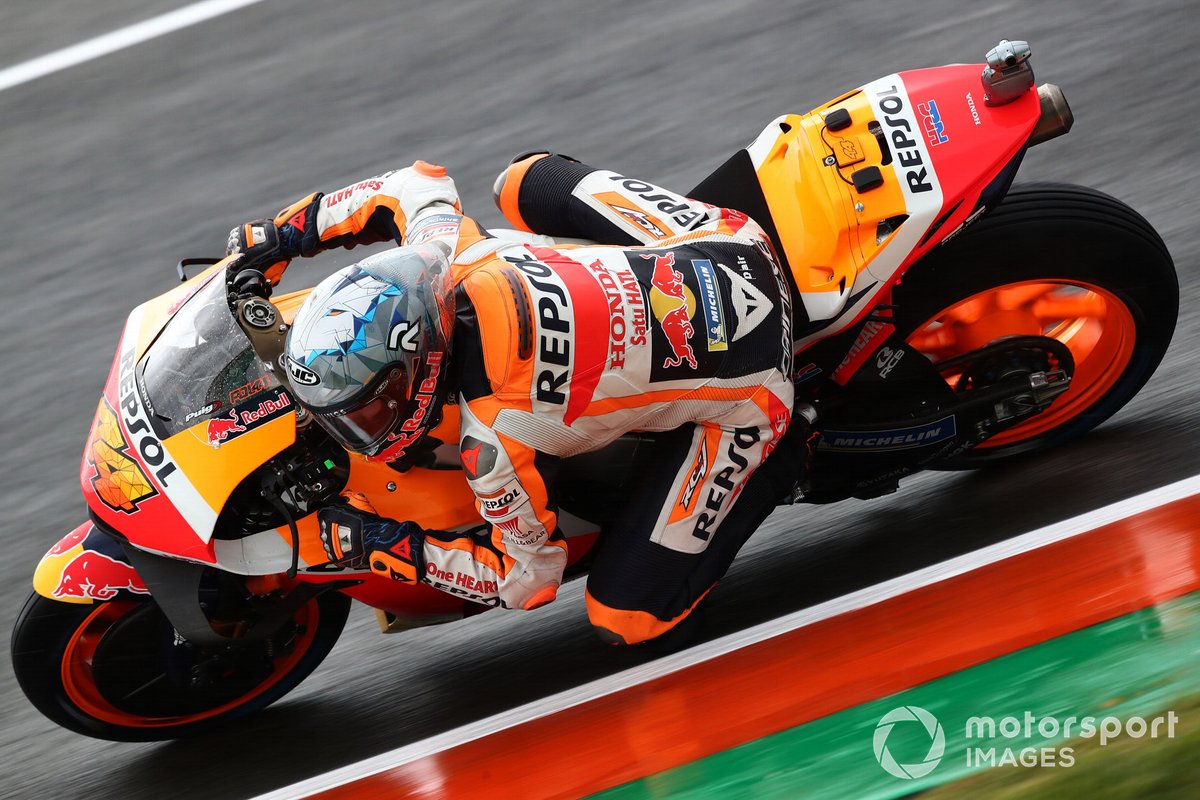 Bagnaia completed the top three a further 0.056s adrift, with Alex Rins leading the Suzuki charge in fourth from Jorge Martin on the Pramac Ducati.

Takaaki Nakagami made a late improvement to sixth on his LCR Honda to head 2020 world champion Joan Mir – who won the European GP at Ricardo Tormo last year – on the sister Suzuki and KTM’s Brad Binder.

Petronas SRT’s Andrea Dovizioso was the leading Yamaha rider after Friday’s running in ninth on the 2019 M1 which won last year’s Valencia GP, while Johann Zarco rounded out the top 10 on his Pramac Ducati.

Following his crash, Quartararo’s afternoon didn’t improve much as a mistake on his final lap exiting Turn 5 left him down in 11th at the end of FP2 from Aprilia’s Aleix Espargaro and Morbidelli.

Valentino Rossi held a spot inside the top 10 in the closing stages on his Petronas SRT Yamaha, but was demoted to last place at the chequered flag but just 1.3s off the pace.