This weekend marks the final outing of nine-time grand prix motorcycle world champion Rossi, who will retire from MotoGP at the end of his 26th season on Sunday.

Tributes from within the paddock and around the motorsport world, including Formula 1 drivers Lewis Hamilton and Lando Norris, have been pouring in ahead of Rossi’s MotoGP farewell.

Going against all forecasts pre-weekend, rain arrived for the start of Friday morning’s FP1 session at the Ricardo Tormo Circuit.

Only 10 riders put lap times on the board in the opening stages of FP1, but the entire grid would eventually venture out as the rain slightly intensified.

KTM’s Miguel Oliveira set the early pace with a 1m45.246s, which he followed up with a 1m43.880s before Ducati’s Francesco Bagnaia took over at the top of the timesheets with a 1m43.804s.

With just over 15 minutes to go Bagnaia went faster with a 1m41.511s, further cementing top spot with a 1m41.244s before crashing at the Turn 2 left-hander moments later. 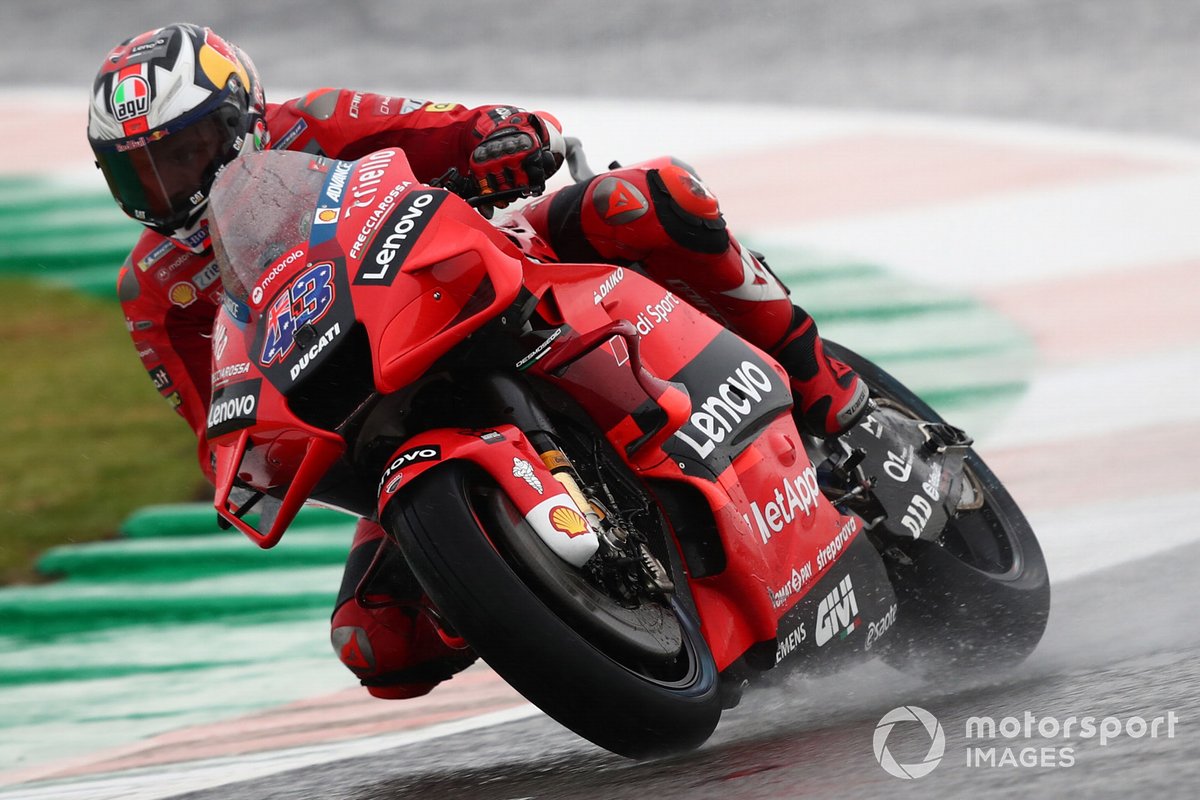 He was unharmed but wasn’t the only rider caught out by the conditions, with Tech3’s Danilo Petrucci – also starting his final MotoGP race – suffering a highside at Turn 4 early on, while Bagnaia’s Ducati team-mate Jack Miller fell off at Turn 1 when he ran wide onto the painter run-off.

Miller’s crash came just moments after he’d moved to the top of the timesheets with a 1m40.724s.

Lecuona – World Superbike-bound in 2022 with Honda – then deposed Miller from top spot with a 1m40.569s in the dying stages of FP1, and went unchallenged through to the chequered flag to see out the morning fastest of all from Miller.

Oliveira completed the top three from Pramac’s Johann Zarco and the Suzuki of Joan Mir, while Bagnaia was sixth after his crash.

Avintia rookie Luca Marini also crashed late on at Turn 6, but still held onto seventh from the factory Yamaha of Franco Morbidelli and the sole factory Honda of Pol Espargaro, after HRC elected against replacing Marc Marquez – suffering with vision problems following a concussion – with test rider Stefan Bradl.

LCR’s Takaaki Nakagami rounded out the top 10, while 2021 world champion Fabio Quartararo was 1.5s off the pace down in 15th as Yamaha’s typical wet weather problems appeared to persist.

Petrucci didn’t return to the track after his early spill, while Rossi wasn’t classified on the standings having completed just four laps in the conditions – the best of which putting him an unrepresentative 10.2s off the pace.