Aprilia’s Aleix Espargaro made a major form turnaround at the MotoGP Valencia Grand Prix to top a tight FP3 as Valentino Rossi secured a Q2 place for his final qualifying.

Despite the cool track conditions greeting the riders for the start of FP3, lap time gains were on offer in the first half of the 45-minute session.

Honda’s Pol Espargaro set the early pace on the individual timesheet with a 1m31.908s, before brother Aleix on the Aprilia took over with a 1m31.544s that put him ninth overall.

Having endured a bafflingly off-the-pace day on Friday, Espargaro continued to make progress in FP3 when he moved to sixth on the combined times with a 1m31.405s.

He improved that again with just over 21 minutes remaining when he found a 1m30.952s to go third overall, while LCR’s Takaaki Nakagami shadowed him by 0.001 seconds in fourth.

With 15 minutes remaining KTM’s Brad Binder became the third rider inside the top 10 to make a combined timesheet improvement in eighth, before Yamaha’s Franco Morbidelli leaped up to fifth with a 1m30.993s – as just 0.068s covered the top six at this stage.

Jack Miller’s Friday best was finally surmounted by 2020 world champion Joan Mir on the Suzuki, who guided his GSX-RR to a 1m30.905s.

This lap was likely to be scrubbed as he passed through a yellow flag zone at Turn 13 after Pol Espargaro suffered a big highside accident, which he needed to be stretchered away from – though was conscious.

He was taken to the medical centre for checks and has since been transferred to a local hospital for further evaluation.

But Mir followed up this lap with a 1m30.876s when the yellow flag was withdrawn to remain fastest, though only briefly as Miller blitzed him with a 1m30.547s seconds later. 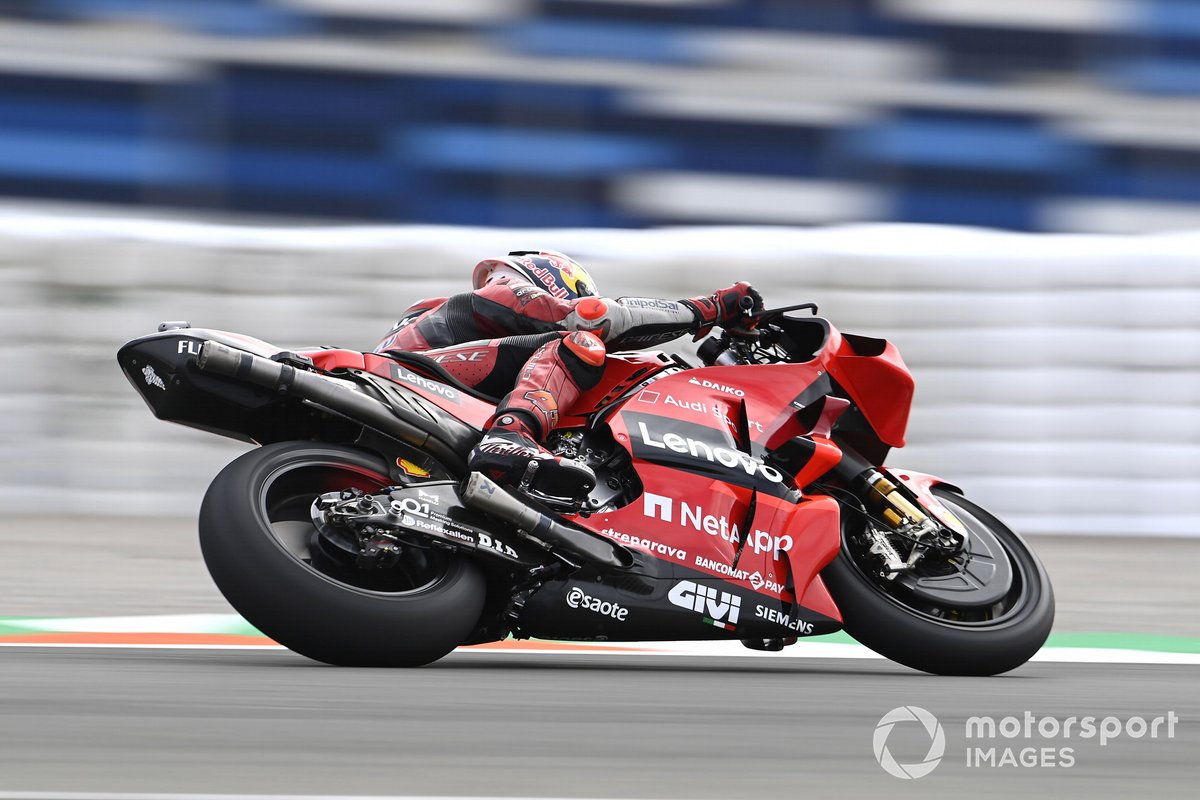 Miller was second after topping the times on Friday

Miller’s lap would continue to stand as the order shuffled dramatically, until Aleix Espargaro found a 1m30.529s to beat the Ducati rider by 0.018s – doing so having just watched his younger brother's accident.

Yamaha’s Morbidelli completed the top three ahead of Miller's team-mate Francesco Bagnaia and the Pramac Ducati of Jorge Martin, with Mir the only Suzuki currently in Q2 after ending FP3 sixth. Team-mate Alex Rins missed out by 0.041s in 11th.

He was also just 0.034s behind reigning world champion Fabio Quartararo on the factory Yamaha, with Pramac’s Johann Zarco and Nakagami eighth and seventh.

So tight were the margins in FP3 that just 0.860s covered the entire 21-rider field down to Avintia rookie Enea Bastianini in last.

He will go through Q1 later this afternoon alongside the likes of Rins, KTM duo Brad Binder and Miguel Oliveira, SRT’s Andrea Dovizioso and the sister Aprilia of Maverick Vinales.