Ducati’s Jack Miller set an outright lap record at Losail as he topped the opening day of the second Qatar MotoGP pre-season test ahead of Yamaha’s Fabio Quartararo.

Generally the last to hit the track in the opening test, Suzuki were among the first out on Wednesday afternoon, with Alex Rins topping the opening hour with a 1m55.791s.

By the end of hour two, Aleix Espargaro had guided his Aprilia to top spot with a 1m55.049s, with his Honda-mounted brother Pol just 0.016s adrift in second.

First test pacesetter Fabio Quartararo continued his evaluation of Yamaha’s 2021 chassis and went fastest of all at the end of the third hour with a 1m54.588s, before Honda’s Espargaro dropped the pace to a 1m54.272s to see out hour four.

Espargaro – who admitted last weekend not knowing the limits of the RC213V was proving “stressful” – was soon shuffled back to second by Ducati’s Miller. The Australian continued to run with Ducati’s new aerodynamic fairing, which is thought to be an attempt at a ground effect device, as well as various other updates.

With just under three hours to go, Miller set the best lap of testing so far with a 1m53.826s, which would go untouched well into the final hour – though three both Espargaro brothers and Pramac’s Johann Zarco were able to join him in the 1m53s.

Miller lit up the timing screens in the final 15 minutes of the session and produced an outright lap record of 1m53.183s to see out the session fastest. 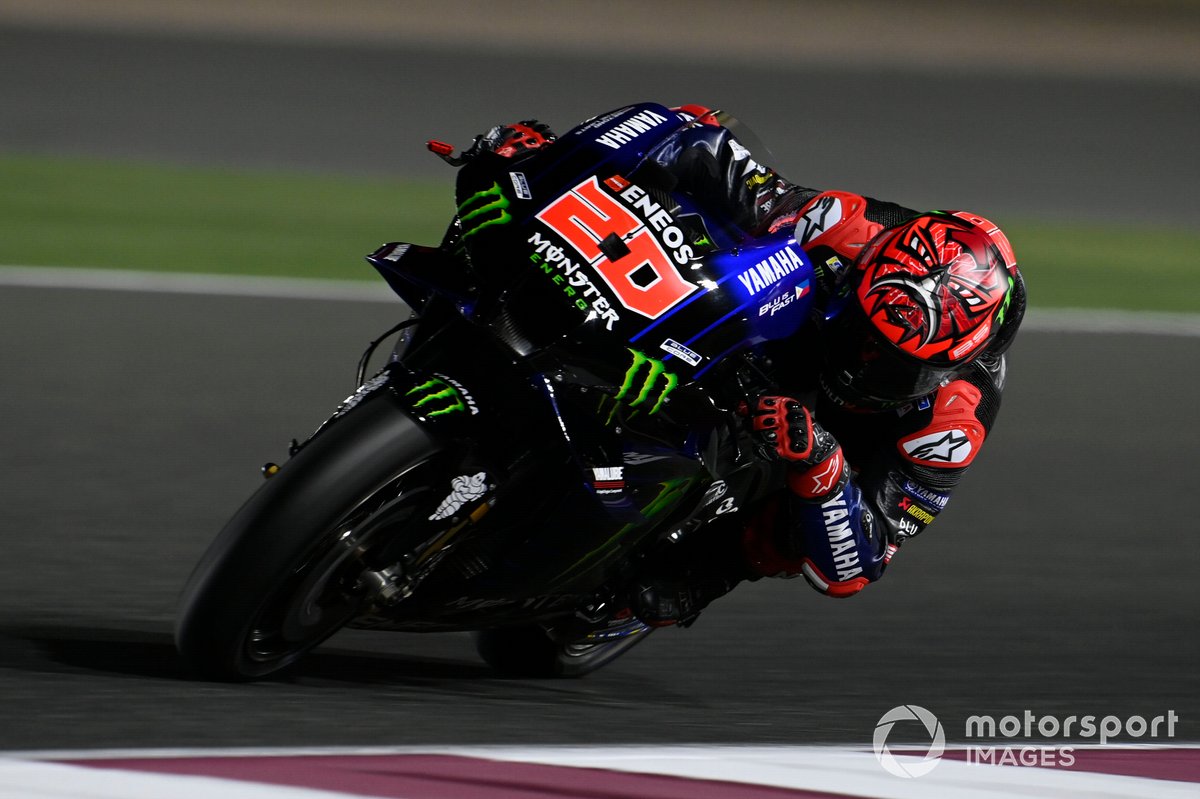 Quartararo remained second, 0.080s behind Miller, while his Yamaha team-mate Maverick Vinales completed the top three with a 1m53.510s as he tried the 2021 M1 chassis on a busy Wednesday in which he completed 77 laps – though did have a crash.

Zarco was fourth as he continues to progress the GP21 at Pramac, with Pol Espargaro rounding out the top five ahead of his brother Aleix on the Aprilia.

Reigning world champion Joan Mir tested Suzuki’s 2022 engine on Wednesday, but didn’t try the 2021 GSX-RR chassis despite feeling it lacked in the braking area last weekend compared to the 2020 frame.

Mir was seventh, 0.895s off the pace, with team-mate Rins eighth, Ducati’s Francesco Bagnaia ninth and LCR’s Takaaki Nakagami – who suffered a crash at Turn 1 – completing the top 10.

KTM had another low-key day with its RC16, Miguel Oliveira the Austrian marque’s top runner in 12th – 1.3s off the pace. Team-mate Brad Binder has had a bit of a bruising test so far, crashing again on Wednesday, having fallen twice on Sunday, and ended the day in 20th behind Pramac rookie Jorge Martin.

Bastianini headed LCR’s Alex Marquez, who registered his fourth crash of the test, while HRC tester Stefan Bradl’s day ended after just 15 laps when he crashed while testing a new aero fairing and suffered some neck pain.