Friday morning's 45-minute FP1 session was delayed by over half an hour to allow track temperatures to come up to allow for safer tyre warm-up.

This didn't stop five riders from suffering front-end crashes during the session, though, and this was despite the front tyre allocation being tweaked to allow for an additional soft front.

With MotoGP's visit to Aragon taking place several weeks later than normal, morning conditions will remain cold and MotoGP has taken the decision to delay all FP3 sessions by 30 minutes and Sunday's warm-up sessions by 20 minutes.

However, Honda's Alex Marquez - who was caught out by the cold conditions in FP1 - believes this delay won't be long enough.

"Tomorrow we expect it to be so cold in the morning," Marquez said.

"With delay of the practice to 10:25am, I think it will be not enough because will be also too cold but we are close to winter and this is normal." 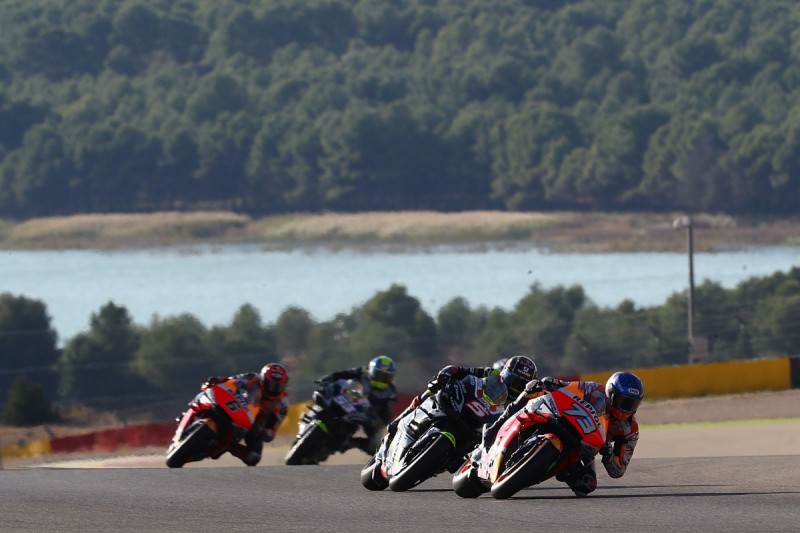 Aprilia's Bradley Smith believes MotoGP should look at the possibility of having just one 90-minute session in the afternoon for these colder events as there's nothing to be learned from an FP1 in these conditions.

"I don't know if it's better to do maybe a one-hour-and-30-minute session in the middle of the day when it's at its hottest rather than these two 45-minute sessions," Smith said.

"I think all categories maybe could do that, especially on Friday. Saturday, we'd have to see how that works out especially with the one bike rule, etc.

"But there was no way to ride this this morning, really. You just have to have a look at the lap times and how far everybody was away and how much everything improved this afternoon.

"Nothing even switched on this morning, even if you stayed out on track eight, 10 laps, they're just really was no feeling."

Avintia's Johann Zarco crashed twice on Friday and says the conditions were "not funny" because he could have injured himself.

"I'm disappointed because I had two crashes today because of the cold," Zarco said.

"It's not funny at all. I destroyed bikes and I could also injure myself. This morning it was trying to get a bit faster in the beginning of the session, not doing crazy things and I crashed."