The 2019 MotoGP season-opening Qatar Grand Prix will stick to its planned start time, after riders' final attempt to push through a late schedule change on safety grounds was rejected

The start time for the Losail race had been moved an hour later compared to 2018 but many riders called for this to be reversed, as experiences from pre-season testing had left them concerned about late-evening track conditions.

After an initial push to bring the race start forward again was resisted before the weekend, top riders again lobbied for the change and vowed to bring it up in Friday's Safety Commission meeting.

Yet despite what appeared to be widespread support for a 7pm start, it has now been confirmed that the race will kick off at 8pm local time as scheduled.

Friday's second practice had kicked off at 8.05pm after a small delay and featured few dramas, with only Franco Morbidelli suffering a fast crash at Turn 1 - while Marc Marquez set the fastest-ever lap at the circuit.

Speaking before the Safety Commission, LCR Honda rider Cal Crutchlow said the conditions had been "perfect" in second practice, yet stressed that even light rainfall during the weekend could cause dew to build up - which would lead to higher humidity while track temperatures dropped.

"In our test there was I don't know how many, 12 crashes, after 7.30pm. You can imagine our feeling about it.

"I love this race, I love Qatar, the way that they do it. 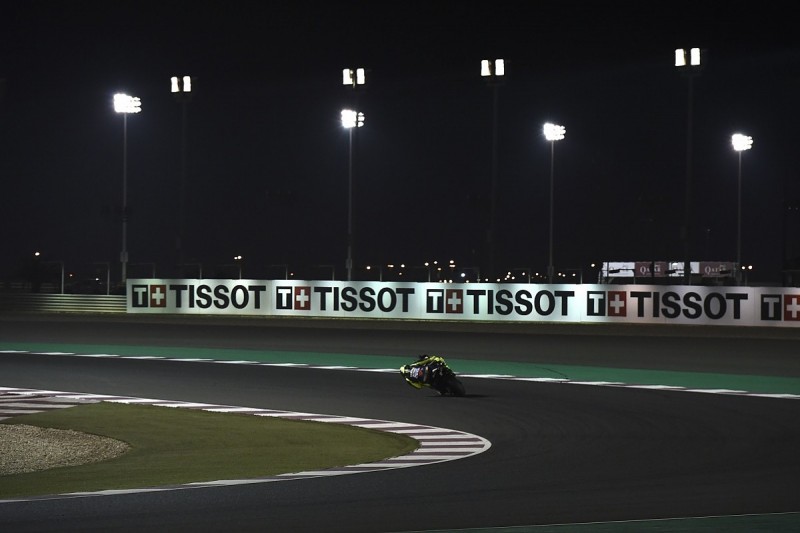 "It makes a good race, but if the dew on the track is like sometimes it can be, they won't have any finishers.

"No matter how fast or slow you ride, there would be no finishers - if it is really, really bad like we've seen."

His LCR team-mate Takaaki Nakagami agreed with Crutchlow, saying: "For sure 7pm will be better, more safety.

"Around the end of the race, around 8.30pm, conditions almost completely change - even during the test, [around] 8 o'clock, I had a crash, the feelings in the front tyre completely change."

It is, however, understood that series promoter Dorna has assured riders it will explore the possibility to revert to a 7pm start next year.