Marquez finished fastest in a relatively sedate session, in which three riders secured places in the second phase of qualifying without improving on their Friday times.

During the opening 35 minutes, only Valentino Rossi from sixth to fifth and Suzuki pair Aleix Espargaro - despite a fall at Turn 14 - and Maverick Vinales made any gains inside combined the top 10.

Marquez moved from sixth to third in the combined times with a 1m32.896s with seven minutes remaining, and a further gain on his next lap moved the Spaniard to the top.

His 1m32.451s lap was 0.180 seconds faster than Lorenzo, who also improved late in the session on his Yamaha.

Friday pacesetter Pol Espargaro did not improve on his second-practice time - fourth on Saturday morning with a 1m32.861s - but he remained third overall for Tech3 Yamaha.

Dani Pedrosa, second on Friday, also did not improve and he crashed at Turn 15 on an outlap halfway through the session but still remained fourth in the overall order, ahead of Vinales, who improved again late.

Andrea Dovizioso was the other rider to book a Q2 place based on his Friday effort, having only set the 13th-fastest time on Saturday morning.

Dovizioso's Ducati team-mate Andrea Iannone has been ruled out for the balance of the weekend, after fracturing a vertebra on Friday morning.

Ducati also trialled a unique rear wheel on the Desmosedici GP of test rider Michele Pirro - who was seventh in the session and ninth overall - with the spokes inside the rim covered, ostensibly evaluating aerodynamic benefits.

LCR Honda's Cal Crutchlow wound up fifth in the session and seventh overall to secure a place in the second phase of qualifying, despite a late crash at Turn 2, while Rossi - running a Blues Brothers-themed special helmet for the Misano weekend - and Aleix Espargaro wound up eighth and 10th. 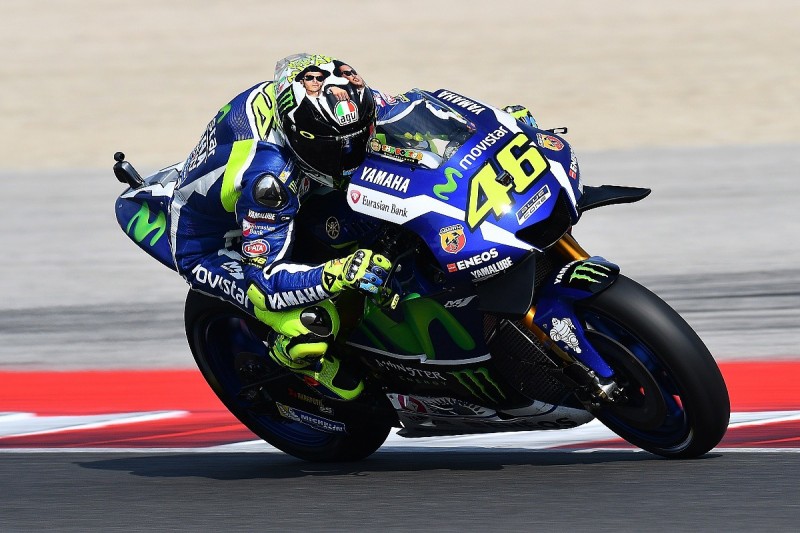 Alvaro Bautista was 11th on the combined timed, missing out on a Q2 place for Aprilia by 0.208s, while Danilo Petrucci and Alex Lowes at Turn 15 and Jack Miller at Turn 9 were the other riders to come unstuck during the 45 minutes.