Honda’s Marc Marquez topped a red-flagged wet FP2 for the MotoGP Japanese Grand Prix amid a typhoon threat for qualifying day at Motegi.

Heavy rain and forecasted 100mph winds forced a meeting to be held at Motegi on Saturday morning between MotoGP and the teams about altering the qualifying schedule.

With the extreme winds staying away for the moment, the decision was made to carry on with the current qualifying schedule.

With the rainy conditions affecting FP2, Friday’s 75-minute practice proved to be crucial in deciding the runners making it directly to Q2 in qualifying later today.

Ducati’s Jack Miller – who would start on pole if qualifying does get cancelled and a grid is formed off practice times – leads the pack on the combined order courtesy of his 1m44.509s set in FP1.

They will be joined by both factory Honda riders Marc Marquez and Pol Espargaro, both factory team KTMs of Brad Binder and Miguel Oliveira, VR46 Ducati’s Luca Marini and the sister Aprilia of Maverick Vinales.

The biggest loser of the conditions on Saturday was outside title bet Enea Bastianini – a crash late on in FP1 for the Gresini rider leaving him 14th on the combined order and forcing him into Q1.

The 45-minute FP2 got underway on time at 10:50am local time on a soaked track, which caught out all three championship contenders Quartararo, Bagnaia and Aleix Espargaro – all three running off at Turn 3. 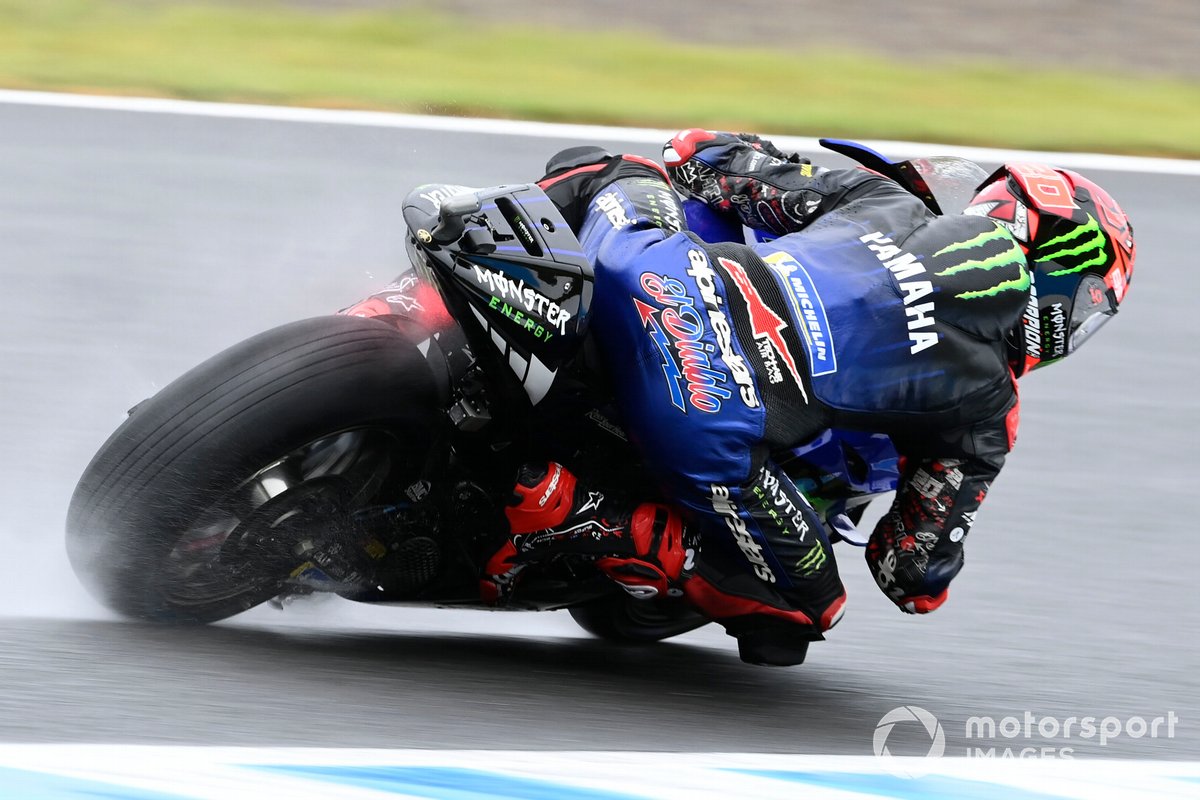 After the first 10 minutes of running, Pramac Ducati’s Johann Zarco led the way with a 1m58.054s – though this stint at the top of the standings would be short-lived, as lap times tumbled and the lead changed constantly as riders got a feel for the conditions.

When the red flag came out with just over 12 minutes remaining to clear up debris from a crash for Honda’s Pol Espargaro, his team-mate Marc Marquez led the way with a 1m55.232s.

Initially holding an advantage of close to a second, Pramac’s Jorge Martin had whittled Marquez’s lead at the top of the timesheets to just 0.144s prior to the brief stoppage.

When the session got back underway at 11:29am local time, Marquez’s 1m55.232s would go unchallenged through to the chequered flag.

Martin remained second from overall practice pacesetter Miller and KTM’s Oliveira – who won MotoGP’s only wet race so far in 2022 in Indonesia back in March.

Zarco was fifth on the sister Pramac Ducati – though faces Q1 later today after missing the top 10 by 0.001s following a crash in FP1.

Franco Morbidelli was the leading Yamaha rider in sixth ahead of Bastianini, LCR Honda’s Alex Marquez, Marini and Quartararo.

Aleix Espargaro ended FP2 in 11th after a slow start to his time in the wet at Motegi, though team-mate Maverick Vinales struggled down in 18th.

KTM’s Binder was the only other faller in the session, the South African – who was 24th – sliding off his RC16 at Turn 3 just prior to the red flag.