The damp and rainy conditions of Friday had given way for the start of the first fully dry session of the Assen weekend in FP3.

It would take just nine minutes for Francesco Bagnaia’s best lap from the drying FP2 session on Friday to be toppled, with Aprilia’s Maverick Vinales making the first move.

Last year’s Assen poleman went fastest of all with a 1m32.960s, which he would improve around six minutes later to a 1m32.911s to lead his former Yamaha team-mate Quartararo.

Team-mate Aleix Espargaro slotted into the top three and will be one of the most relieved riders on Saturday morning, after a technical infringement in FP2 led to all of his slick tyre laps being cancelled. That demoted him to last on the combined timesheets and threatened his Q2 hopes.

But he took over from Vinales with just under 12 minutes of the 45-minute session remaining, with a 1m32.518s on a fresh soft rear slick.

Espargaro went on to improve with a 1m32.164s set a few moments later, but was denied any further gains when he crashed going through Turn 3 at the end of the session.

Championship leader Quartararo cemented second with a 1m32.166s to shadow Espargaro by 0.002s, although this lap was cancelled after the chequered flag.

However, an earlier 1m32.205s still kept him second as Vinales initially rounded out the top three. But he too had his best lap cancelled, which dropped him to seventh. 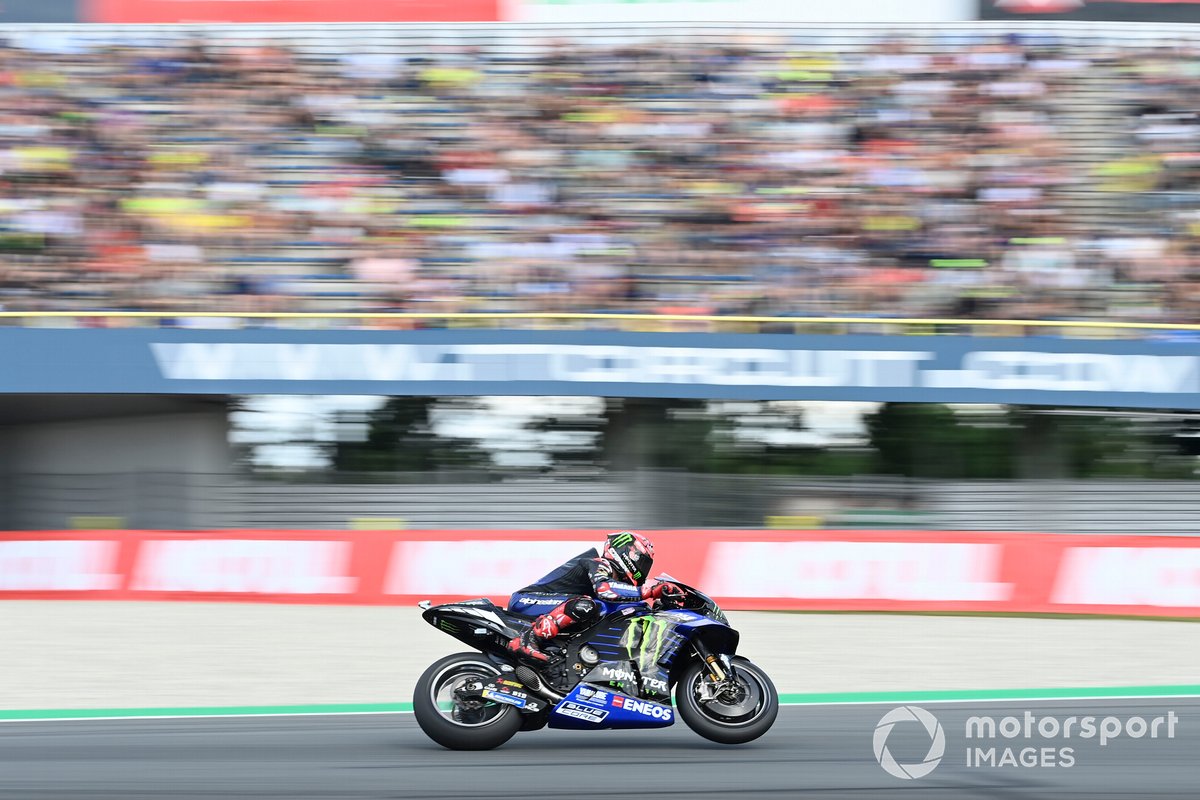 Alex Rins made late gains to fourth to bag himself a place in Q2 in qualifying, but his Suzuki team-mate Joan Mir – who had a fairing come loose at the start of FP3 – missed the cut in 11th by 0.084s.

LCR Honda’s Takaaki Nakagami leaped up to fifth with his final lap to head VR46 Ducati rider Marco Bezzecchi and Friday pacesetter Bagnaia on the factory team Ducati – Vinales’ lap cancellation promoted Rins down to Bagnaia up a spot.

Pramac duo Jorge Martin and Johann Zarco, who crashed at Turn 7 late on, slotted in behind Bagnaia, with Jack Miller on the sister factory team GP22.

There were also crashes for Gresini duo Enea Bastianini and Fabio Di Giannantonio, as well as Yamaha’s Franco Morbidelli – all three riders dropping into Q1 as a result.

Morbidelli has also been handed a long lap penalty to be served in Sunday’s race for blocking two riders in FP2 on Friday.

No KTM riders made it directly into Q2 in FP3, with Brad Binder the leading RC16 in 14th ahead of team-mate Miguel Oliveira.

Ahead of FP3, Honda announced Pol Espargaro had withdrawn from the rest of the weekend due to injuries he sustained in Germany. Team-mate Stefan Bradl was 22nd at the end of FP3 on the sole remaining factory team Honda.