Espargaro qualified 12th and couldn't make any inroads on that position in the race, finishing behind team-mate Brad Binder.

The Spaniard says everything "started to bend" for KTM in qualifying, when a collision with his brother Aleix stopped him from improving on 12th, while also lamenting a bad start on his part which put him into "a bad position" for the opening corners.

"Saturday, everything started to bend for us, started to be a little bit complicated," Espargaro said after the race.

"Starting from 12th position, everything changed so much.

"MotoGP in the past race, the start is super important.

"It's like 50% of the race, because in the first, second, third corner - even the fourth corner - you lose a lot in the first laps, like four seconds in five laps and two seconds in just a couple of corners.

"It's difficult to start so far back on the grid, and then also my start was not so good.

"I got in a bad position at the first corner and also other riders overtook me. It was a very, very difficult and tough race.

"When I started to push, the grip was very weak front and rear, and I went wide a couple of times. 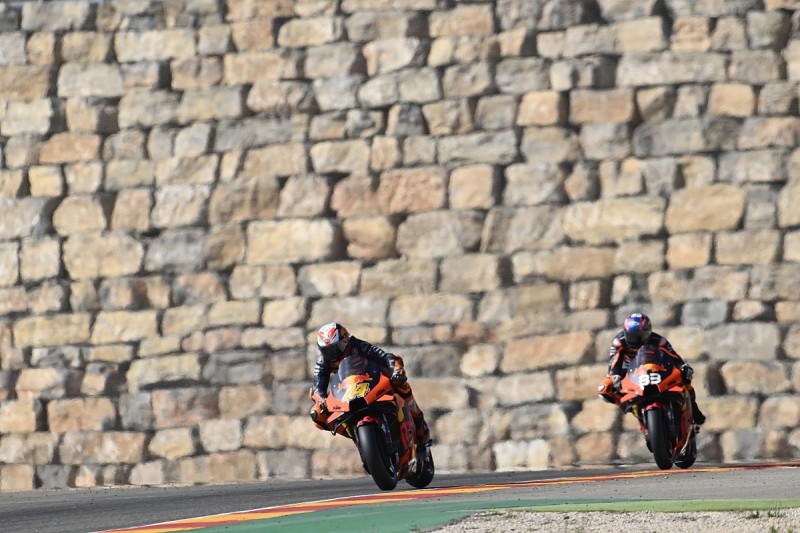 "In one of them, Brad overtook me and following him I overtook [Danilo] Petrucci.

"The result is not good for nobody in all the factory and it's painful."

All KTM riders struggled in the colder temperatures at Aragon last weekend, which meant they couldn't get their preferred medium front tyre to work.

Tech3 duo Iker Lecuona and Miguel Oliveira did race that tyre to 14th and 16th, but Espargaro and Binder couldn't, and the Spaniard says KTM has to "force" that compound to work in the second Aragon round this weekend otherwise it will be "lost".

"Normally we are always using the medium tyre, sometimes harder compounds than the others," he added.

"But here I don't know why we needed to use the soft in the front, even if it was quite weak everywhere, just because we couldn't bring the medium up to the proper temperature and we couldn't make it work.

"So, the main thing for the next weekend is to make the medium front work, because without it we're completely lost because our strong point is stopping and entry into the corner.

"If we use the soft tyre, we cannot take profit of this.