The 19-lap Moto3 race kicked off Sunday’s racing action at Aragon, with poleman Izan Guevara leading every single lap to claim his fourth win of the 2022 campaign.

Guevara kept the lead into Turn 1 on his Aspar GasGas ahead of Max Racing Husqvarna’s Ayumu Sasak and the Ajo KTM of Dani Holgado.

This is how the order would remain for the entire 19 laps, Guevara making a crucial breakaway in the closing stages to take the chequered flag 0.957 seconds clear of Sasaki.

Holgado faded in the latter stages to take the chequered flag, dropping 6.5s off the lead to claim his first podium in grand prix racing.

Deniz Oncu took a lonely fourth on his Tech3 KTM as Adrian Fernandez rebounded from being punted off by David Munoz at Turn 5 in the latter stages to finish fifth.

Fernandez was left unable to set a final flying lap in qualifying on Saturday when two members of the Max Racing team tried to block his exit from his pit box.

The mechanics were handed €2000 fines each and have been given deferred bans to be served at the Thailand and Australian GPs.

Ivan Ortola was sixth on the MTA team KTM from Munoz – who had to serve a long lap penalty for his Fernandez clash – and Ajo KTM’s Jaume Masia. The top 10 was completed by Prustel GP’s Carlos Tatay and John McPhee on the second Max Racing bike.

Guevara’s Aspar team-mate Garcia was 13th after a scrappy race, while Leopard Honda’s Foggia was 14th – putting him 58 points adrift of Guevara. 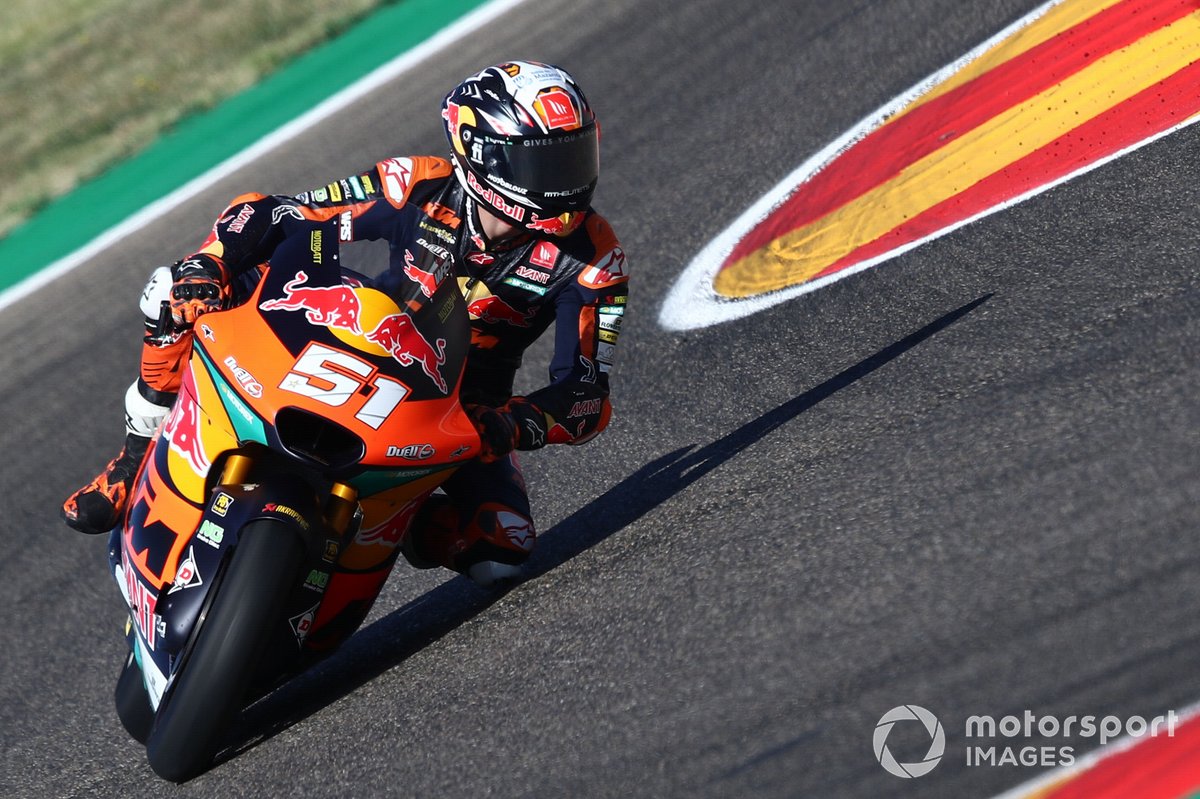 Acosta dropped to third briefly in his chase of Fernandez when he went too cautious into Turn 8/9 to avoid gravel left on track from an earlier crash, allowing Pons’ Aron Canet briefly into second.

Canet couldn’t do anything to keep Acosta at bay, with the Ajo KTM rider moving into the lead into the penultimate corner at the end of lap 10.

Acosta cruised into the distance to claim his second win of his rookie Moto2 campaign by 2.6s as Canet snatched second from Fernandez on the penultimate lap.

Fernandez slipping to third at the chequered flag means he has only extended his championship lead over Ogura to seven points, with Canet 37 adrift in third.