Francesco Bagnaia is on pole position for the MotoGP Algarve Grand Prix at Portimao. Here’s how and when you can watch the race.

For a second straight round it was a tricky qualifying for world champion Fabio Quartararo, who could only manage seventh place on the factory Yamaha after a set-up change failed to work as expected and gave the French rider a “weird feeling” in Q2.

Joan Mir secured his first-ever MotoGP front row start on merit, having started from third place at last year’s Styrian GP due to a grid penalty for Johann Zarco, with the Suzuki rider completing the front row alongside the factory Ducati duo.

Jorge Martin led Pramac Ducati team-mate Zarco at the front of the second row, with Pol Espargaro claiming sixth place for the factory Honda squad. Espargaro is without regular team-mate Marc Marquez who was ruled out of the Algarve GP after suffering concussion in a training accident last weekend.

With Quartararo in seventh, he will be joined on the third row by LCR Honda’s Alex Marquez and Franco Morbidelli on the sister factory Yamaha.

Having progressed through Q1, Iker Lecuona leads the KTM charge in 10th place for Tech3, as Suzuki’s Alex Rins and Avintia Ducati’s Luca Marini round out the fourth row.

Valentino Rossi will start his penultimate MotoGP race from 16th on the grid for Petronas SRT Yamaha. 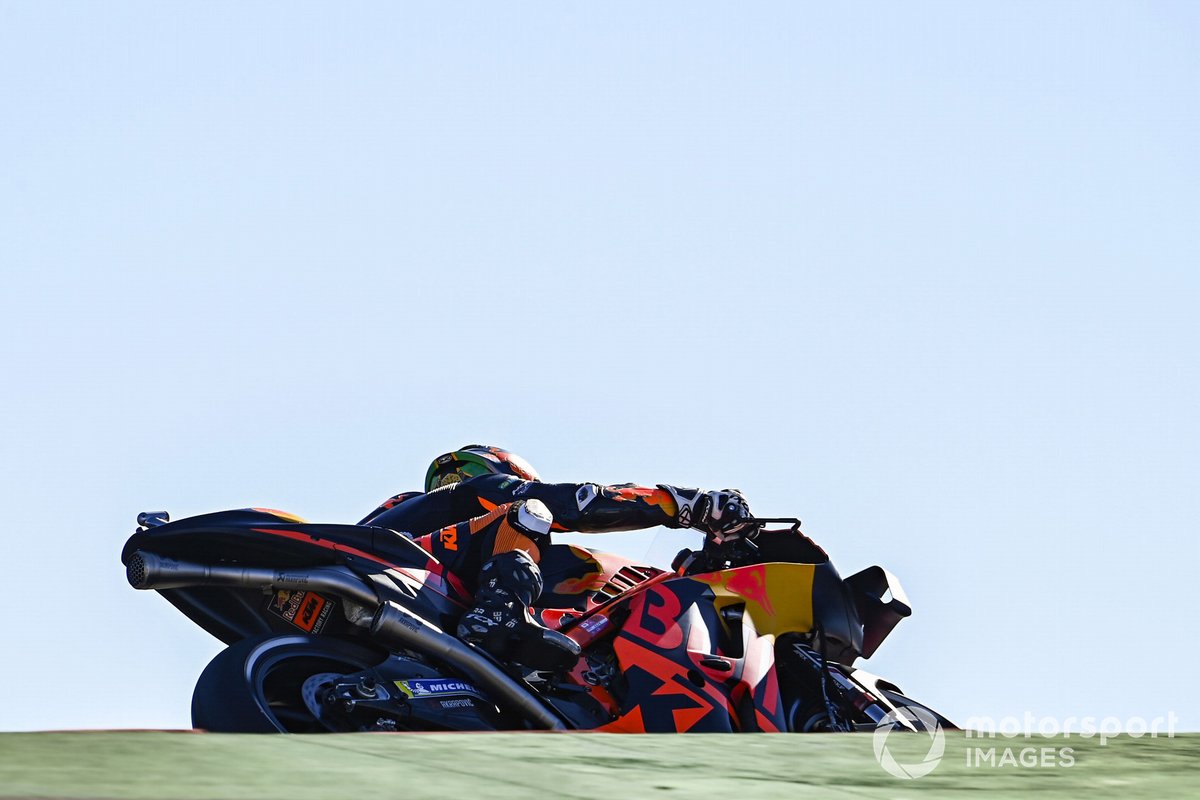 When is the MotoGP Algarve Grand Prix?

In the United Kingdom, the Algarve MotoGP race day will be broadcast live on BT Sport, which has live broadcasting television rights for the 2021 MotoGP season. The race will be shown live on BT Sport 2, with race coverage starting at 12:30pm GMT, directly after the Moto3 race and before the Moto2 race.

How can I watch the Algarve MotoGP highlights?

What's the weather forecast for the race at Portimao?

Dry and sunny weather is forecast for the Algarve Grand Prix on Sunday afternoon, with a low chance of rain, and a high of 18 degrees Celsius for the start of the race – two degrees warmer than the Emilia Romagna GP at Misano last time out.

It takes inspiration from the other double-headers MotoGP put on both in 2020 and this year as part of the reshuffled calendar due to the COVID-19 pandemic. Earlier this season Qatar hosted the first-ever Doha GP as the second leg of its back-to-back races, while the Red Bull Ring hosted the Styrian GP as its second part of its double-header and Misano hosted the Emilia Romagna GP as its second race of the season.