Francesco Bagnaia dominated the Algarve Grand Prix to win the MotoGP constructors’ championship for Ducati, as the race was red-flagged on the penultimate lap for a crash.

A heavy collision between Tech3’s Iker Lecuona and KTM stablemate Miguel Oliveira at Turn 13 on the penultimate tour led to the race being red-flagged, although both riders were seen on camera as being conscious.

Ducati’s Bagnaia led the 25-lap race for all but a few hundred metres to claim his third win of the campaign, and officially secure second in the standings, while world champion Fabio Quartararo crashed out late on after a tricky race for the Yamaha rider.

Bagnaia got a sluggish launch off the line from pole position, which initially allowed Ducati team-mate Jack Miller to move into the lead.

But Bagnaia regained first into the first corner, with Joan Mir on the Suzuki mugging Miller into the Turn 8 right-hander for second to begin the chase of Bagnaia.

Both the Italian and the pursuing Mir quickly put six tenths between themselves and Miller, with the leading duo’s lap times pretty closely matched in the early laps.

But by lap seven Bagnaia had started to stretch his legs, causing Mir to slip eight tenths adrift of Bagnaia.

That gap would steadily climb to over a second, with Bagnaia over two seconds clear come the 16th of 25 laps, closing the book on the battle for victory at the Algarve GP.

Quartararo didn’t make a great start from seventh on the grid, dropping to eighth, before climbing back up to sixth when Lecuona and Honda’s Pol Espargaro ahead ran wide at Turn 1 on the second lap.

But the Yamaha rider’s race would be dictated by the M1’s lack of horsepower as he got mired behind the Pramac Ducati of Jorge Martin, with Johann Zarco eventually joining that battle.

Quartararo crashed out on lap 21 when he fell at the Turn 5 hairpin, registering his first DNF of the 2021 season. 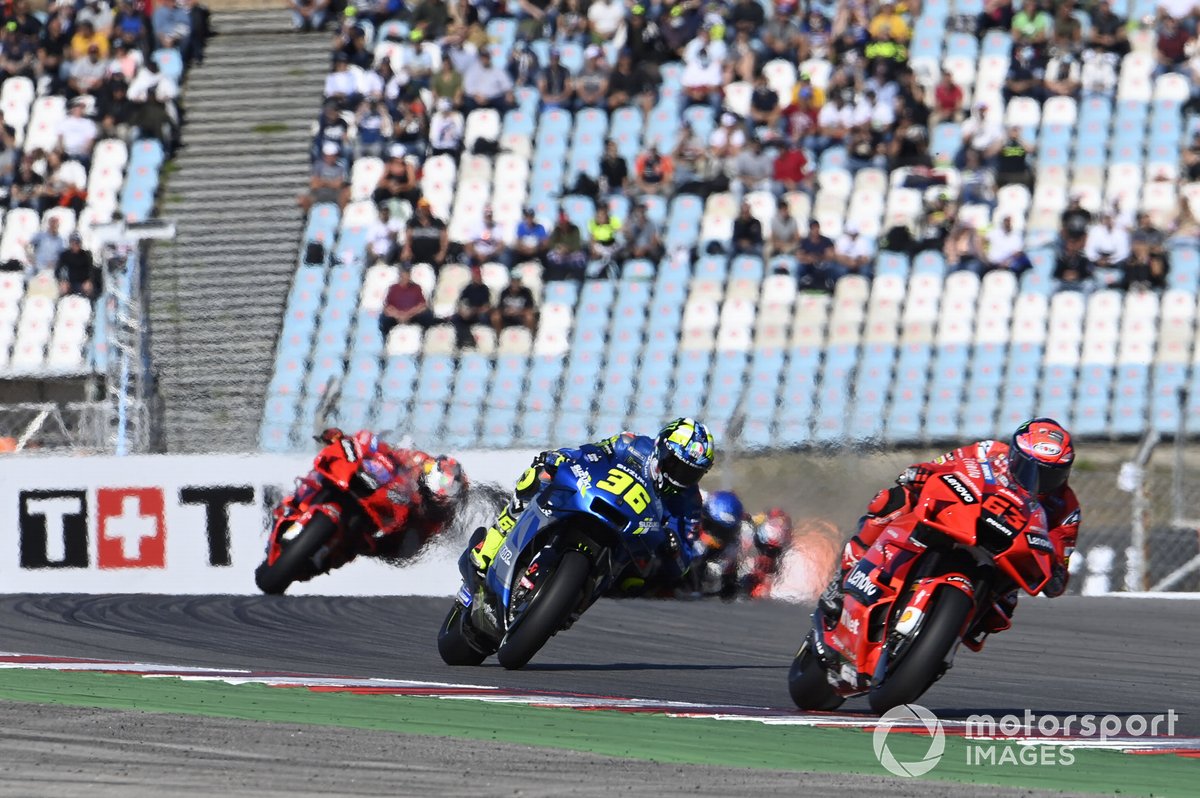 Mir chased Bagnaia, but his pursuit was in vain

The race was halted just as the leaders started the second-to-last lap for the Lecuona/Oliveira incident, with the result taken from the end of lap 23.

This secured Bagnaia victory, with Mir taking his best finish of the season in second to secure third in the riders’ championship.

After a late tussle, Miller took the final podium place from LCR’s Alex Marquez, enjoying his best race of the 2021 season aboard the Honda.

Maverick Vinales was the sole Aprilia at the finish after team-mate Aleix Espargaro crashed out on lap eight at the first corner, with Yamaha’s Franco Morbidelli the final finisher in 17th.

As well as Lecuona, Oliveira and Quartararo, Tech3’s Danilo Petrucci also failed to see the chequered flag after a lap-one crash.