Misano MotoGP: Zarco bike pushing for point 'better than nothing'

The Frenchman had been course to claim seventh place before his year-old Yamaha ran out of fuel on the final tour of the 28-lap race.

Zarco's bike finally came to a halt at the final corner, at which point the two-time Moto2 champion leapt off the bike and started pushing the stricken M1 along the length of the start/finish straight.

In the process, he dropped all the way down to 15th place but scored a solitary point for his heroic effort and received a rapturous reception from the fans in the main grandstand.

Speaking to media afterwards, Zarco was philosophical about the issue and said he was pleased to at least be able to put on a show for the spectators that cheered him over the line.

"I got the fuel problem before Turn 11, I tried to stay in sixth gear and really use the minimum of the bike," he said.

"This was working until Turn 14, but the last two lefts were even worse.

"From the last corner I had to go down next to the bike and run - and it was long.

"It's good to have the public for that. We must think that a MotoGP race is a show, so at least I [put on] some show and they won't forget it.

"It's the kind of thing that should not happen, so we're disappointed.

"[But] in the end I got one point, better than nothing. There are worse things in life than finishing without fuel." 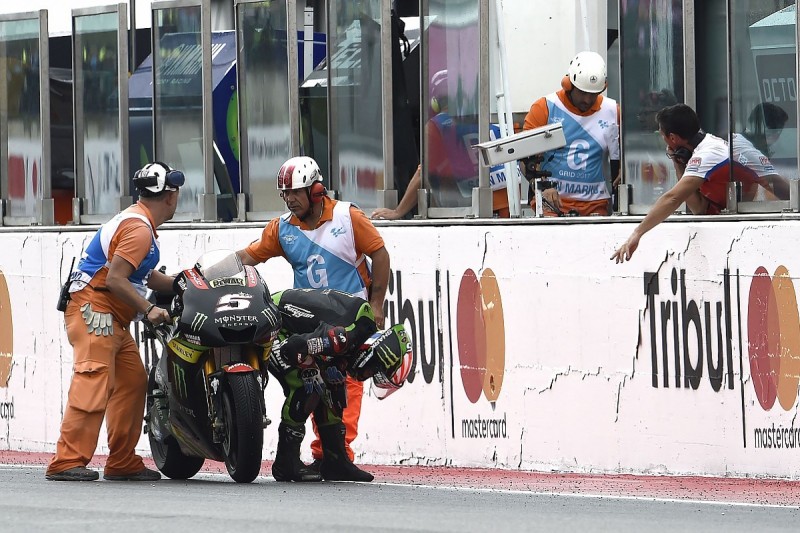 Zarco added that he was aware he was losing positions as riders passed him within sight of the finish line, including LCR Honda rider Cal Crutchlow - who had previously crashed out of fifth.

"I didn't see [Jonas] Folger but I saw the two KTMs and also Crutchlow - even with the crash he finished in front of me.

"You lose less time crashing than pushing your bike."