Ducati’s Francesco Bagnaia topped a tight third practice for the MotoGP San Marino Grand Prix as Marc Marquez will have to go through Q1 in qualifying after a late crash.

The miserably wet conditions from Friday gave way to gloriously hot sunshine for the final 45-minute practice session of the Misano weekend.

As a result, improvements on the combined times started to come in almost immediately, with Aprilia’s Aleix Espargaro the first significant improver to fourth.

As the session ticked off its first 10 minutes, Aragon race winner Bagnaia went fastest on the combined order with a 1m32.489s.

Over half of the field had made gains on the combined standings after 10 minutes of running, with championship leader Fabio Quartararo proving Bagnaia’s nearest challenger in the early stages 0.105s adrift.

With 25 minutes to go in the session, Friday pacesetter Maverick Vinales proved his form on the Aprilia was no fluke as he moved back to the top of the pile with a 1m32.200s.

This would stand as the benchmark for the next 15 minutes before Quartararo set the first sub-1m32s lap of the weekend, a 1m31.975s, to depose his former Yamaha team-mate Vinales.

As the field pushed for laptimes in FP3, the track bit several of them with Valentino Rossi suffering a fast off at the Turn 13 right-hander on his Petronas SRT Yamaha 25 minutes from the end of the session.

Honda wildcard Stefan Bradl and KTM’s Miguel Oliveira would also have slow-speed front-end crashes at the Carro hairpin at Turn 14 and the Tramonto right at Turn 10 in the latter stages.

And with just over two minutes to go, while he was pushing to get into the top 10, Marc Marquez crashed – his 19th incident of the season - at Carro and was unable to get his Honda going again. 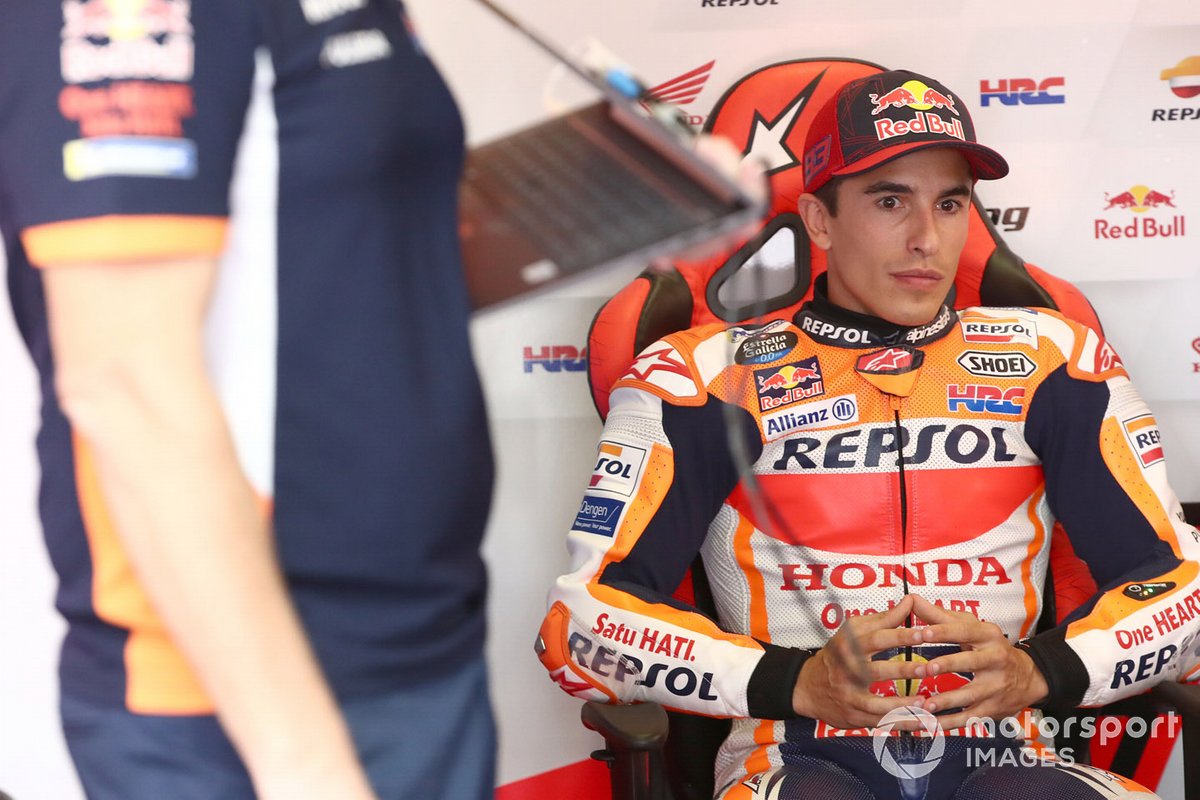 This resigned the six-time MotoGP world champion to a Q1 appearance in qualifying later this afternoon – giving him an unwelcomed 15 extra minutes of running on a physical circuit on his still weakened right arm.

Moments before Marquez crashed, Bagnaia re-established himself at the top of the timesheets with a 1m31.936s, which would go unchallenged through to the chequered flag.

Reigning world champion Joan Mir was top Suzuki rider in fourth ahead of Vinales, who is the only Aprilia into Q2 so far after team-mate Alex Espargaro had a late top eight lap cancelled for a yellow flag infringement.

LCR’s Takaaki Nakagami was just 0.049s outside of a direct Q2 place in 11th and will face Q1 later with the likes of Bradl, Marc Marquez, Yamaha’s Franco Morbidelli and Aleix Espargaro.

All KTM riders continued to struggle at Misano, with the leading RC16 Brad Binder in 17th – albeit 1.096s off the pace.

He headed Tech3’s Iker Lecuona, who crashed late on, while Miguel Oliveira on the second factory team KTM and the sister Tech3 KTM of Danilo Petrucci – who also had a late fall – occupyied the final spots.

The returning Andrea Dovizioso was only 21st on the timesheets, but the Petronas SRT rider found 2.2s on his best lap from Friday’s only dry running in FP1.