Reigning MotoGP world champion Joan Mir says “I don’t think I can win” the French Grand Prix as Suzuki is “struggling” at Le Mans this weekend.

The track proved to be Mir’s worst venue of his title-winning 2020 season, as the first wet race of his MotoGP career left him in 11th at the chequered flag.

Mir ended Friday’s practices 13th overall after a late crash in FP2 and admits he doesn’t know to what extent he can improve his situation going forward as he isn’t “comfortable” at the track on the Suzuki.

“I did my best to make things work and that crash hurt me,” Mir said on Friday.

“I hope to do a dry session tomorrow, even if the feeling is not the best.

“Here it seems that the other bikes are doing well and we are struggling, last year was the worst result at this circuit, I didn't feel good today and I crashed.

“I'm confident that I can turn the situation around, although I don't think I can win on Sunday. But if I'm focused and I can fight with the top five, I'll be satisfied.

“Le Mans is difficult for our bike, I liked it and enjoyed it in the other categories, but now I don't feel comfortable.

“The team has worked well and I think I can improve tomorrow, but I don't know to what extent.” 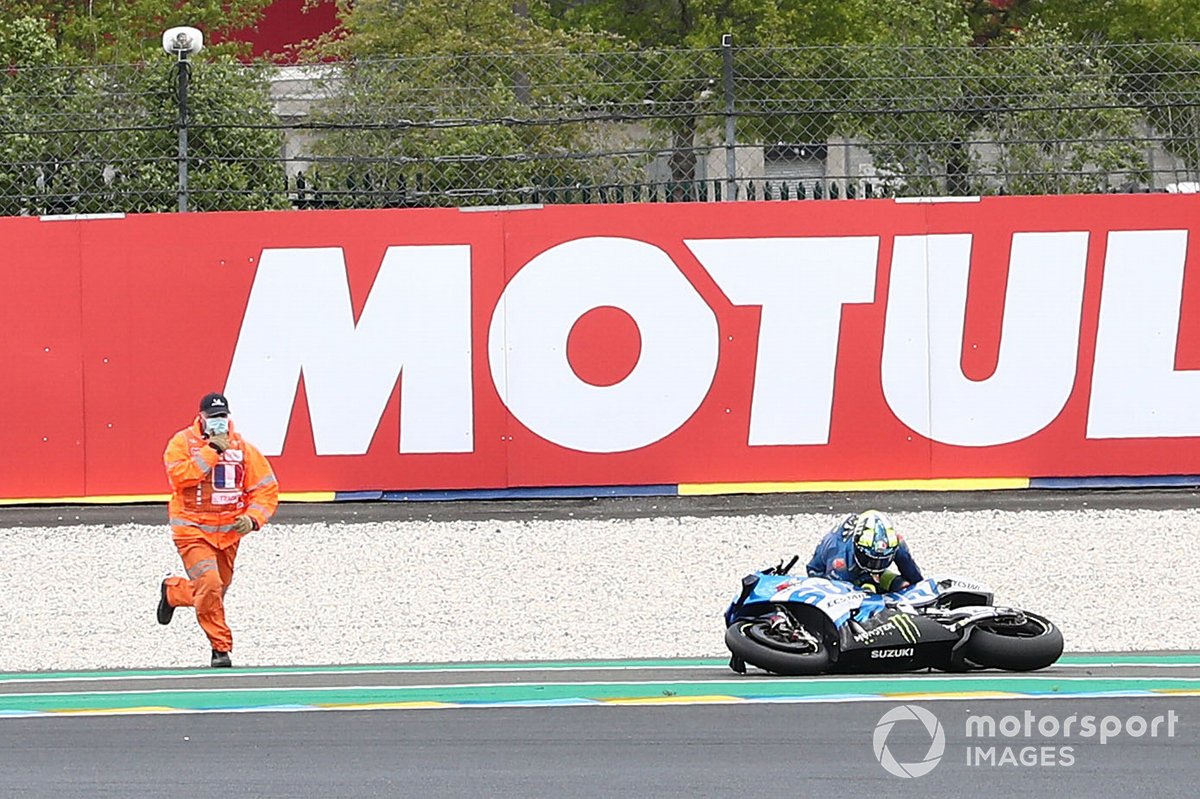 Expanding on where the Suzuki struggles around Le Mans, Mir says the front-end is the main issue.

"When you don't have a good feeling with the front end, it's because you don't feel that the bike is ready to be faster,” he added.

“It gives you the feeling that the wheel slips and that prevents you from turning the bike and stopping it in the corners.

“This tarmac doesn't use tyres, so the most important thing here is to have confidence in the front wheel.”

Team-mate Alex Rins was stronger at Le Mans in 2020 than Mir, having charged his way up to second before a late crash.

Despite slipping outside of the provisional Q2 places on Friday after a tumble of his own, Rins was far more positive about his day and is enjoying the best feeling he ever has at Le Mans in MotoGP.

When asked to explain why he felt so good, Rins replied: “Sincerely, I don’t know.

“Since the beginning I go out from the box behind Maverick [Vinales] and I expected to struggle to follow him.

“But I felt quite nice behind him, I overtook him and then I was riding free. I don’t know why, but the feeling was quite nice today.

“Let’s see if we can have this feeling tomorrow. In terms of the race, I would like the race to be flag-to-flag. It’s a long time without this kind of race.”