Jack Miller says MotoGP rival Alex Rins "scared the s*** out of me" during the Italian Grand Prix at Mugello, as the Australian was caught out by the Suzuki's cornering ability

The fast-turning GSX-RR of Rins charged from 13th on the grid to run behind fourth-placed Miller after just two laps, and Rins then fired it down the inside of the Pramac rider at the sweeping Correntaio right-hander.

Miller was caught off-guard and sat up on his bike, although he stayed with the lead group and would re-pass Rins on the next lap before he crashed on the 15th lap.

"That race was a lot of fun," Miller said. "I enjoyed it. It was a little scary at some points.

"For example with Rins. That Suzuki seems like it can turn on a dime piece because the first time when Rins passed me, I probably had a metre - not even a metre - between myself and the kerb, and he was able to make it fit and he scared the shit out of me as he went past."

Rins went on to continue fighting for the race lead before it became a straight duel between race-winner Petrucci, Dovizioso and Marquez.

The Suzuki rider finished fourth but felt disappointed in the result because he had the "rhythm to win".

"Before the start of the race, we already knew that this track would be difficult for us for this with the long straight," Rins said. 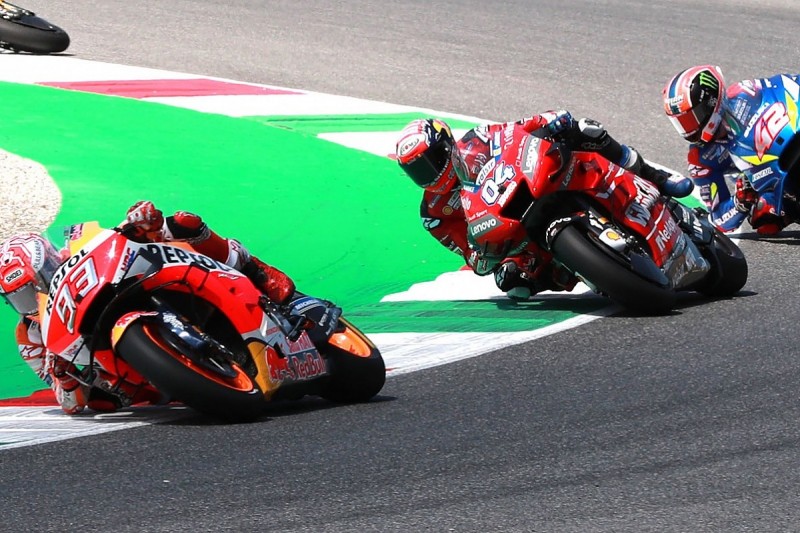 "After crossing the finish line P4 I was disappointed because I had the rhythm to win the race.

"But anyway we finished fourth position on a track that we struggle a lot at.

"It's hard for the championship because now Marc and Dovi go [ahead] a little bit - but anyway there's a lot of races to do, and always in the second part of the championship we are strong.

"Qatar and here were was two tracks that are very difficult [for Suzuki] and we finish fourth, we beat some Ducatis, we beat some Hondas, so it's OK."

Rins said his top-speed deficit was the main factor that hampered his victory chances as the "physical demands are much higher", and the Suzuki rider estimated a loss of 0.3-0.4s loss on the final straight.

Dovizioso: Petrucci has made MotoGP self-belief breakthrough in '19