Alonso had a brief run on the production specification Honda RC213V used in MotoGP's Open class by the likes of Nicky Hayden, Jack Miller and Eugene Laverty this season, riding beside a Honda NSX Concept GT car driven by Marquez.

The two Spanish legends also swapped helmets at the end of their demonstration run.

In addition to his MotoGP experience and laps in Honda road and GT cars, Alonso drove the McLaren-Honda MP4/6 used by Ayrton Senna and Gerhard Berger in the 1991 F1 season.

F1 driver turned IndyCar race winner Takuma Sato was part of the event as well, with his duties including laps in Honda's 1968 RA301 F1 car.

They were joined by a large contingent from Honda's motorcycle competition and Japanese domestic racing programmes, with exhibition races also featuring.

Marquez was beaten by works Honda MotoGP team-mate Dani Pedrosa as they both came from the back of the grid in a contest on Honda's CBR250 Dream Cup one-make bikes, but Marquez was victorious in a short race in Honda N-One cars.

The duo also rode classic Honda NSR500 500cc world championship bikes from the 1984 and '85 seasons, used in period by riders such as Freddie Spencer, Wayne Gardner and Randy Mamola. 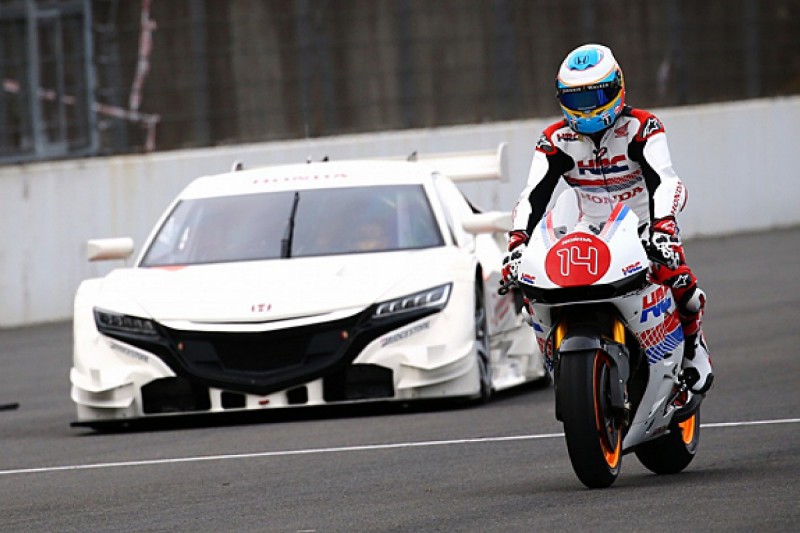 Ducati unhappy with its 2015 MotoGP season despite improvement