His team-mate Valentino Rossi fared even worse, finishing the day down in 14th.

Although he was pleased with his performance during a wet morning session, in which the Yamaha riders were fifth and sixth, Vinales admitted he was baffled by his lacklustre showing in the afternoon.

"This morning I felt OK, better than at the Sachsenring, especially in the wet," said Vinales.

"In the afternoon we struggled much more.

"I don't know why. I cannot turn with the bike, it's so difficult to make the laptime.

"Maybe the conditions of today or the grip was not so good, and this problem becomes bigger.

"I cannot turn the bike and it's difficult to stop.

"We have to try to find out the problem with the bike, because it's very difficult to ride the bike like that and even to go fast."

Vinales added that he is still using two different types of chassis, following the introduction of a new frame for the last two races at Assen and the Sachsenring.

He now wants to focus on solving his issues with one chassis, without confirming which one he will choose.

"I think from tomorrow we're going to take one chassis and work really hard with one chassis, trying to solve the problem," he said. "Let's see how it goes.

"We have to pay real attention in the work we are doing, because it looks like we miss something from the way and we have to recover." 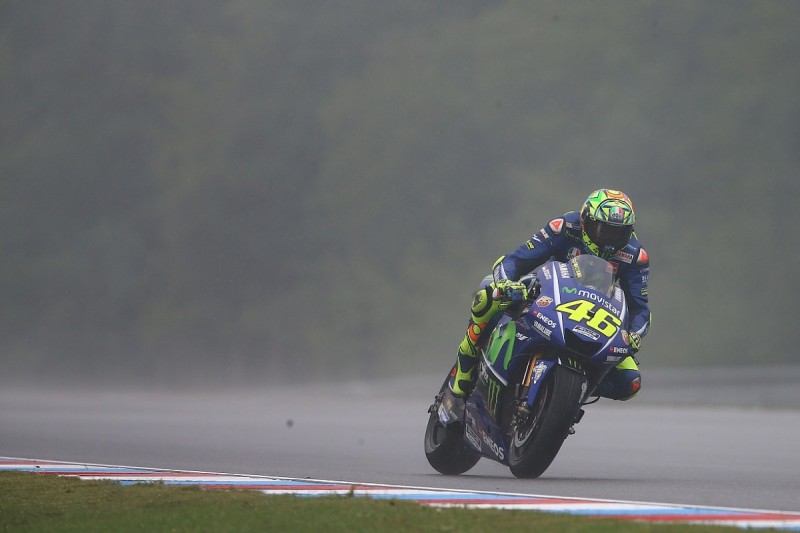 Rossi said his position in the timesheets was unrepresentative, as a bike problem robbed him of the chance to make a late improvement on soft tyres.

But he conceded a wet practice three would leave him in trouble, as it would mean he and Vinales would both have to fight their way through Q1.

"In the afternoon my feeling with the bike and my pace was not so far [away] with the medium tyre," said Rossi.

"After that I had a problem with the bike, so I had to change bike but I didn't change tyre, I preferred to continue with the medium because I had to do some comparison between two settings.

"The others improved with the soft, so my position is bad but my pace with the medium is quite good.

"We hope tomorrow morning will be dry, if not I have to do Q1. We hope for a dry FP3 to improve.

"But my pace is not bad and I feel quite good with the bike."