Race control took the decision to delay the start of the race due to the arrival of rain in the hour leading up to the 2pm local start time, with the whole field having opted for slick tyres.

When the race got underway some 40 minutes after the scheduled start, Marquez made a strong getaway from pole to maintain a slender lead over Ducati rider Dovizioso, who vaulted from fourth on the grid up to second.

After 10 of the 20 laps, Marquez was only 0.4 seconds clear of Dovizioso, but over the following laps he upped the pace significantly, stretching a gap of over three seconds at the head of the field.

The Spaniard finally crossed the line with 2.452s in hand over Dovizioso to stretch his championship lead to 63 points with nine races remaining and tally up his 50th victory in the premier class. 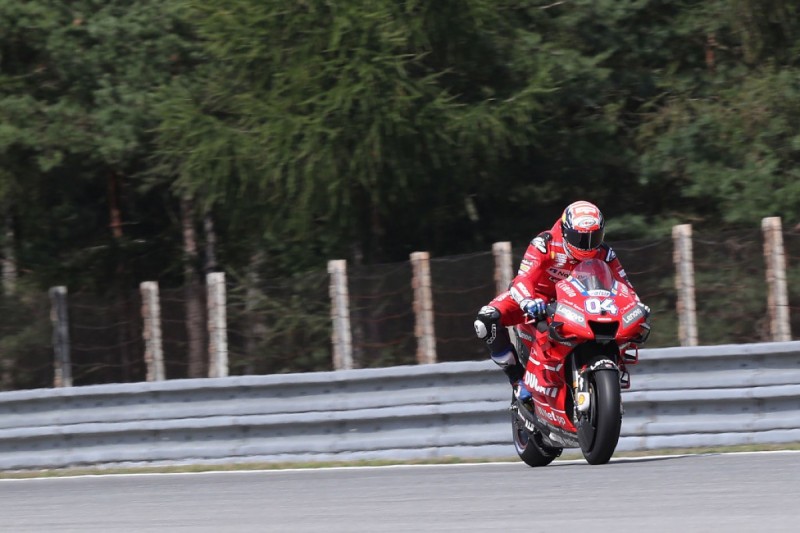 Rins and Miller could likewise do nothing to close on Dovizioso, but Rins came under increasing pressure from Miller in the fight for third in the closing laps.

After a failed attempt to pass at Turn 1 on the penultimate lap, Miller managed to pass later that lap to secure his first podium finish since April's Austin race.

Rossi was the top Yamaha finisher in sixth ahead of Petronas SRT rider Fabio Quartararo and the second factory Ducati of Danilo Petrucci.

Completing the top 10 were Takaaki Nakagami's LCR Honda and the sister works Yamaha of Maverick Vinales, who was forced to recover from a dismal start which left in 15th in the early laps.

After both its works riders qualified in the top five in the rain on Saturday, KTM's top finisher was Pol Espargaro down in 11th place.

Espargaro had maintained his grid slot of fifth in the early laps, but was passed by both Rossi and Crutchlow on lap five, starting his descent down the order.

Teammate Johann Zarco made a wretched start from third, slumping to 12th on the opening lap, and by the end of lap four he had fallen out of the points in 16th.

He recovered to 14th in the end, behind the second Pramac Ducati of Francesco Bagnaia and Miguel Oliveira aboard the Tech 3 KTM.

Joan Mir (Suzuki) and Franco Morbidelli (Petronas) were two early casualties after tangling at Turn 4 on the opening lap, while Hafizh Syahrin crashed out on lap 7.