Honda's Marc Marquez admits the heavy FP2 crash he suffered on Friday at the Dutch Grand Prix “affected me a lot” on Saturday after qualifying down in 20th.

Marquez was flung from his RC213V in the early stages of Friday’s FP2 session and had to undergo scans later that day after fearing he may have fractured his ankle.

Though escaping any serious injury, Marquez admits he felt it would be “impossible” to ride on Saturday morning but felt better as the day went on.

Going through Q1, Marquez crashed late on at the De Bult left-hander while on a flying lap and had to settle for 20th on the grid for Sunday’s 26-lap Dutch TT.

“I mean, it’s true that today I started the morning and the first thing was [I was] like, ‘OK, it will be impossible to ride the bike’ because [after] the crash from yesterday I had a lot of pain on the right foot and I was not able to push with the right arm,” he said.

“Then it was very difficult. This was in the morning, then in the afternoon step-by-step I feel better, and this makes me happy because looks like now if it’s in a better way, tomorrow will be even better.

“And apart from that, in the afternoon I was able to ride fast alone and behind.

“In the first run I did the lap time alone, then in the second run I had the chance to follow Zarco for some laps but in my last lap – OK, I touched the green – but I did a 1m33s-low, 1m33s-middle, which is very good pace on a used tyre.

“It’s true that the crash from yesterday affected me a lot today.” 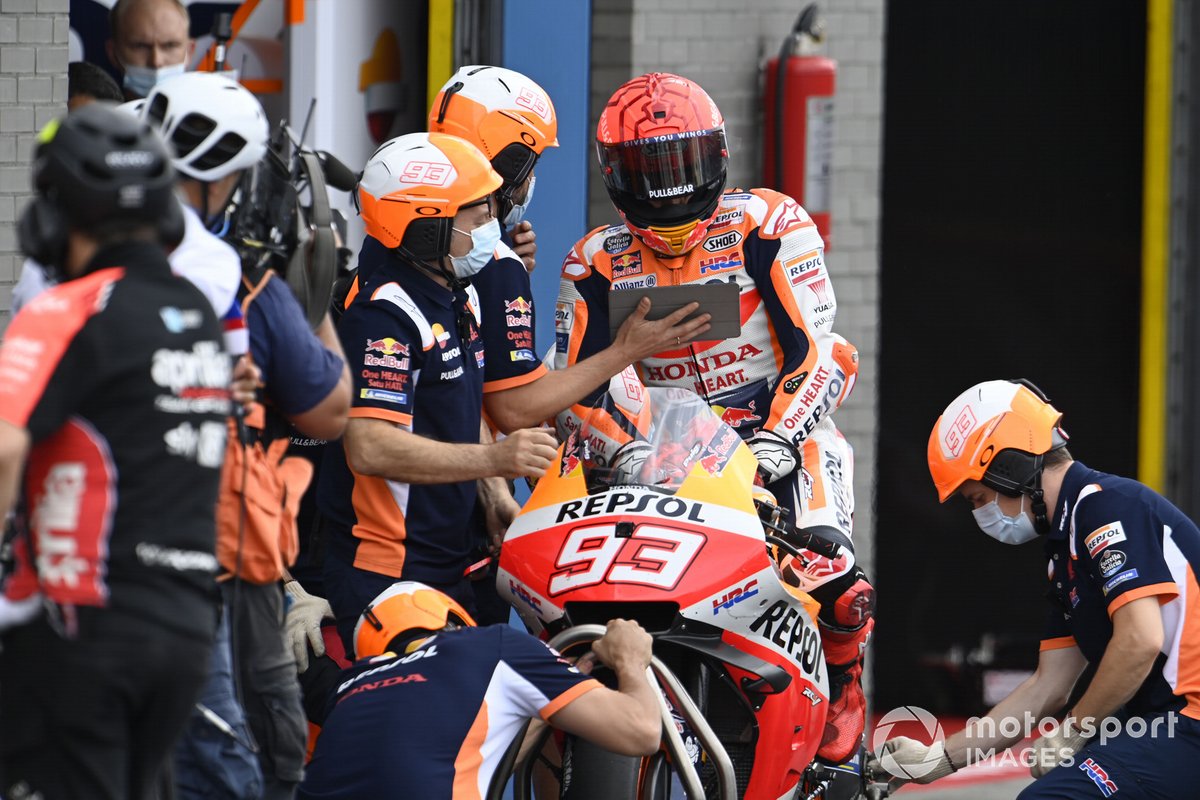 Marquez urged Honda on Friday to find a solution to what he felt was an electronics issue on the bike which caused his crash, and revealed today that his traction control was actually off when he was thrown from his RC213V.

But Honda brought a new electronics setting for Saturday and was met with approval from Marquez.

“It was good because there was a reaction [from Honda] and when you ask and they react it's good,” he added.

“And more than anything, because I analysed the crash yesterday and it was seen that the traction control wasn't on, and that's why I crashed.

“It is important to understand, the brand has reacted and has done well, I am grateful to them.”

Marquez’s factory Honda team-mate Pol Espargaro eased into Q2 straight from FP3, but admits he “f***** up” in choosing the soft front tyre for his qualifying runs and could do no more than 11th as a result.

Bagnaia "lucky" to drop into Q1 in Assen MotoGP qualifying