Dani Pedrosa commanded the early stages after a lightning getaway from fourth on the grid, with his Honda team-mate Marquez slotting into second ahead of the two factory Yamahas of Rossi and Vinales.

But Vinales fell out of contention on the second lap with a low-side crash at Turn 18, ending his winning streak after his victories in Qatar and Argentina.

That left Rossi alone against the Honda duo at the head of the field, with Pedrosa keeping Marquez bottled up until the eighth of the 21 laps, when Marquez made an unsuccessful attempt to pass Pedrosa at Turn 11.

The following lap Marquez was able to make the move stick, with Pedrosa - who unlike Marquez opted for a medium front tyre instead of a hard - initially staying close to his team-mate.

But with seven laps to go, Marquez had pulled a second clear, and from there he steadily increased the gap out front to win by 3.069 seconds - scoring his first win of the year and keeping his perfect record of MotoGP wins in the USA intact.

Pedrosa then came under pressure from Rossi for second, but this battle was skewed by a 0.3s time penalty Rossi had been given for cutting the track and gaining an advantage earlier on. 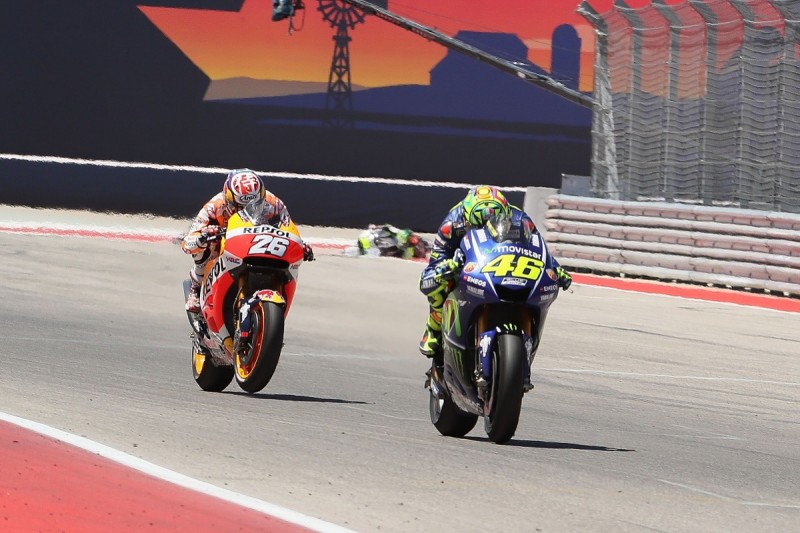 He had done so in avoidance after Tech3 rider Johann Zarco tried to force his way past at the fast downhill Turn 4 one third of the way into the race.

Rossi's penalty didn't affect his result though, as he passed Pedrosa into the Turn 19 right-hander with three laps remaining and pulled away from the Honda rider to the tune of two seconds, taking the championship lead by six points over Vinales in the process.

Cal Crutchlow passed Zarco on the penultimate lap to claim fourth, a further 2.5s back, while Andrea Dovizioso was the top Ducati rider in sixth.

His team-mate Jorge Lorenzo ran seventh for much of the race, but faded late to ninth behind Andrea Iannone's Suzuki and Pramac rider Danilo Petrucci's satellite Ducati in the closing stages.

Jack Miller chased Lorenzo to the finish and completed the top 10 just ahead of Jonas Folger.

Besides Vinales, Karel Abraham, Loris Baz, Sam Lowes and Alvaro Bautista all crashed, although Bautista was able to remount to beat Bradley Smith's KTM to the final point.

Rossi hits out at Zarco's 'Moto2' tactics after Austin incident