MotoGP champion Marc Marquez admits he used to treat each race "like a final" before adopting his new, more conservative mental approach in 2016

MotoGP champion Marc Marquez admits he used to treat each race "like a final" before adopting his new, more conservative mental approach in 2016.

The Spaniard won titles in his first two seasons in the premier class in 2013 and '14, but found the going tougher in '15.

He won five races that year, two less than champion Jorge Lorenzo and one more than runner-up Valentino Rossi, but six DNFs proved costly and he was never really in title contention.

Marquez resolved to change his approach this year, accepting the need to bank points rather than chase wins at any cost, even though it made him feel "conflicted".

It paid off, though, and he sealed a third championship with three races to spare, having been the only rider across the three classes to score points in each of the first 15 races.

"I do everything with all my passion and I give everything," he told MotoGP.com.

"Before, for me every weekend was like a final.

"I was going to the race like I needed to win, forgetting about the championship.

"But now I start to understand that every weekend is a small part to be in the final, that is the championship."

Lorenzo and Rossi's Yamaha was the better all-round package in 2016, and Marquez had to work against Honda's acceleration deficit, as it struggled to tame its aggressive engine with the new control ECU. 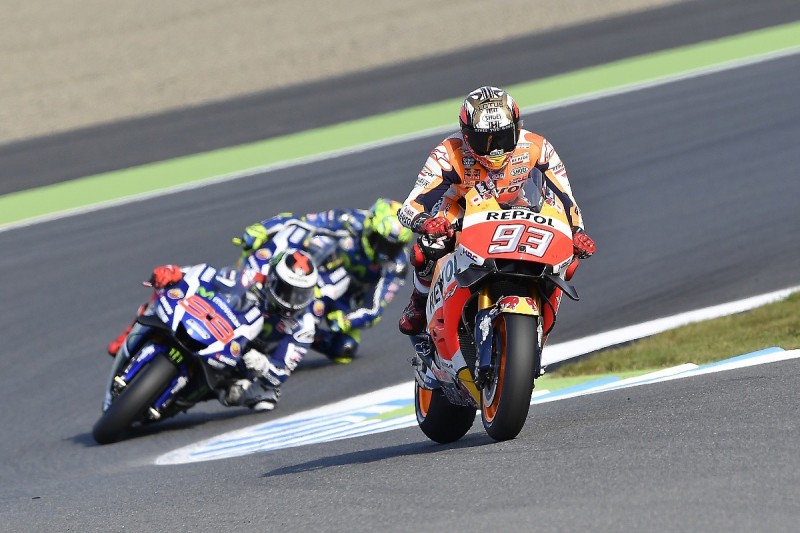 The 23-year-old said after winning the championship that it was also the first time he had really felt pressure, which moves the latest triumph to the top of his list.

"It's the most special title because of the pressure, because many people were looking to me and what I would do," he added.

"And because it's the year that I felt I had not the worst bike, but in some circuits the bike was not ready.

"In pre-season [testing] it was really hard because I arrived really motivated but the bike was not working.

"We were so far from the others and at that time I said: 'OK, it's impossible', especially in Malaysia.

"I had to think about just finishing the race. It was difficult to accept sometimes that some riders overtook me and finished in front of me.

"But I started to understand that it was good for the championship.

"There was a bit of a fight going on inside my head."