Maverick Vinales claimed his third victory of the 2017 MotoGP season in a thrilling French Grand Prix, passing Valentino Rossi on the last lap before his Yamaha team-mate crashed

Rossi started the final lap in first place, having overtaken long-time leader Vinales with three to go, but made a mistake at Turn 8 to relinquish it, then fell at Turn 11.

That gave Vinales a smooth path to victory and a 17-point championship lead, while local hero Johann Zarco claimed his maiden podium finish in second.

From the outside of the front row, Tech3 Yamaha's Zarco stormed into the lead at Turn 2, with a clean move down the inside of Vinales.

He edged away in the early laps, but half-a-second was as big as his gap got on the soft tyres - compared to those around him on the mediums - before the factory Yamaha pair started to reel him in.

Vinales recorded a series of fastest laps at the front, but could not shake Zarco, who remained in touch, running 0.404s behind at the halfway mark.

The lead pair managed to shake off the immediate attentions of Rossi and Marc Marquez, the Honda rider briefly threatening to join the three Yamahas in a four-way fight for the lead.

Marquez and Rossi were, instead, nearly joined by Dani Pedrosa, who forced his way past the Ducati of Andrea Dovizioso and then LCR Honda's Cal Crutchlow - the latter in a particularly forceful move - on lap 10 of 28.

That meant the top five riders were all within 2.6s with 12 laps to go, but it became a lead group of four when Marquez crashed out of fourth under braking at Turn 2 just past half-distance. 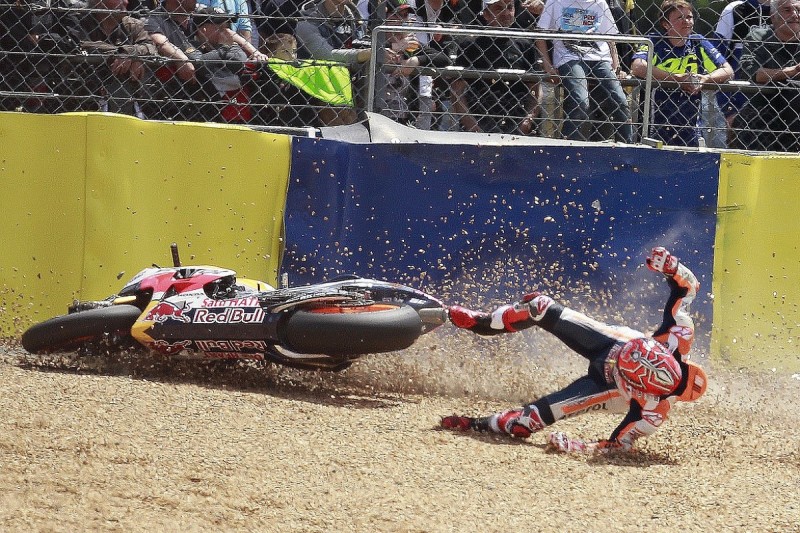 Pedrosa could then not make inroads, leaving the fight for the Yamaha trio, covered by less than a second.

Rossi took second from Zarco at Turn 2 with six laps to go, setting a new lap record to finish the lap 0.627s behind his team-mate, albeit only having taken 0.026s out of the advantage.

He made a bigger dent the next time around with another record to cut the lead to 0.402s.

With three laps to go, Rossi was just 0.191s behind and the Italian sliced up the inside of Vinales at Turn 2 to take the lead.

The pair nearly touched as Vinales tried to fight back on the exit, but Rossi had enough to stay ahead and finish the lap three tenths up.

Rossi led by several tenths starting the final lap, but made a mistake running a defensive line into Turn 8, running wide and giving Vinales space to cut past.

He remained in touch, only to crash at Turn 11 in pursuit of his team-mate and retire from the race.

Vinales duly won by 3.134s, his third victory in five starts with Yamaha, to reclaim the championship lead by 17 points. 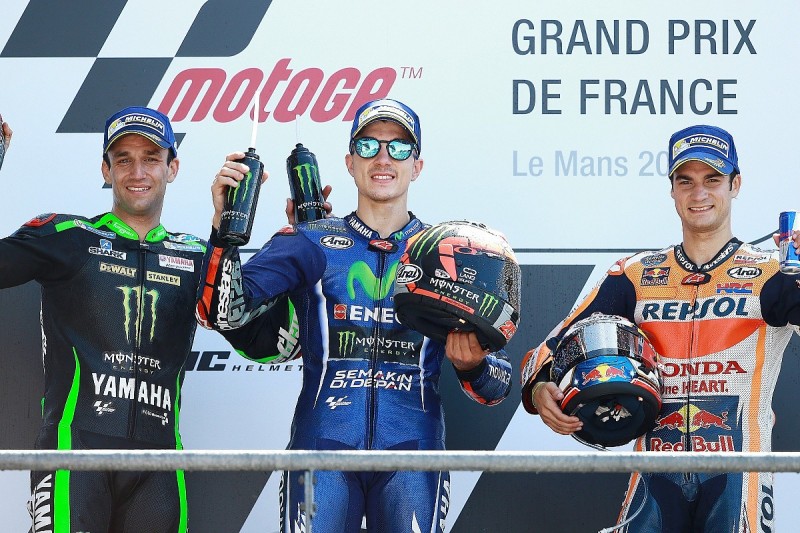 Zarco's third place became second, the impressive rookie's first podium, while Pedrosa rode a lonely race but inherited third from 13th on the grid and second in the championship.

Rossi drops from the lead of the standings to third, 23 points behind Vinales and six behind Pedrosa heading to his home grand prix at Mugello in a fortnight.

Dovizioso passed Crutchlow in the closing laps to finish fourth, while Dovizioso's Ducati team-mate Jorge Lorenzo salvaged sixth from 16th on the grid to end a tough weekend, a further 10s back.

Aleix Espargaro was closing on Lorenzo when his Aprilia stopped by the side of the track with four laps to go when running eighth.

The KTMs of Pol Espargaro and Bradley Smith were 12th and 13th, while Aprilia rookie Sam Lowes and Suzuki stand-in Sylvain Guintoli claimed the other points.

It was a torrid day for the satellite Ducati teams, with Avintia's Baz the only one of the six riders to finish the race, in 12th.

Pramac lost both bikes from the top 10 when Scott Redding and then Danilo Petrucci retired with mechanical problems.