The satellite outfit fielded two entries in 2015 but has otherwise been a single-bike operation since entering the premier class with Casey Stoner in '06.

What would be MotoGP's 24th and final grid slot is reserved for LCR, and Cecchinello is working on getting the finances required to run two bikes in 2018.

Japanese rider Nakagami has emerged as the most likely candidate, with the 25-year-old indicating during the Spanish Grand Prix weekend that he will graduate to MotoGP if he finishes third in Moto2 this year.

Nakagami is sixth in the championship after four races, with points leader Morbidelli already linked with a MotoGP ride with his Moto2 outfit Marc VDS Honda and Pramac Ducati.

Honda is understood to be keen to have a Japanese rider on the grid again, for the first time since its now-test rider Hiroshi Aoyama in 2014.

"The reality is that every MotoGP team is interested in very competitive riders coming from Moto2," Cecchinello said.

"Morbidelli one of them. Morbidelli has some opportunities with some other teams.

"We are looking for sponsors, looking at riders, Nakagami could be one of the group of riders. 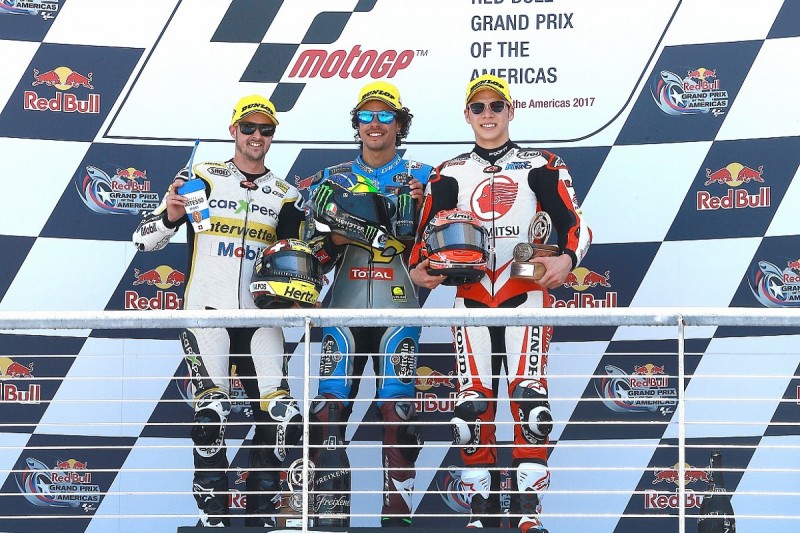 Nakagami - pictured above, right of Morbidelli - is currently in his sixth season in Moto2, with 12 podiums and a single victory at Assen last year to his name.

LCR won a pair of races in 2016 with Cal Crutchlow, who is in his third season with the team but out of contract at the end of this year.

"There is a rumour I might have a team-mate but I don't know," Crutchlow said.

"I didn't sign any contract so at the moment I can race for anybody next year.

"I know nothing about me being with LCR at the moment and if you're talking about Nakagami, yeah, sure I've heard the rumour but it's got nothing to do with me."