The Briton, who joins MotoGP's newest manufacturer after four seasons with Tech3 Yamaha, has been slowest in the 22-rider field on both days of running so far.

Smith was 3.193 seconds off the pace set by Marc Marquez on Wednesday, and then 2.857s behind Maverick Vinales on Thursday with a best lap of 1m31.704s.

Team-mate Pol Espargaro was more than a second faster, albeit still only 19th in Thursday's order.

KTM's maiden MotoGP bike requires a more physical style, and Smith says not pushing hard enough on a single lap accounts for at least part of the deficit.

"I am behind where I should be over the one lap, but I'm quite pleased with my pace on old tyres," admitted Smith.

"I go a tenth slower on a full race distance as I do on one lap.

"So it shows I am being a bit of a pansy when it comes to pulling the pin [for a hot lap].

"It seems to be the high-speed corners where I'm struggling the most, I just need to go with a little bit more commitment.

"But it's easier said than done when you are riding a new motorcycle." 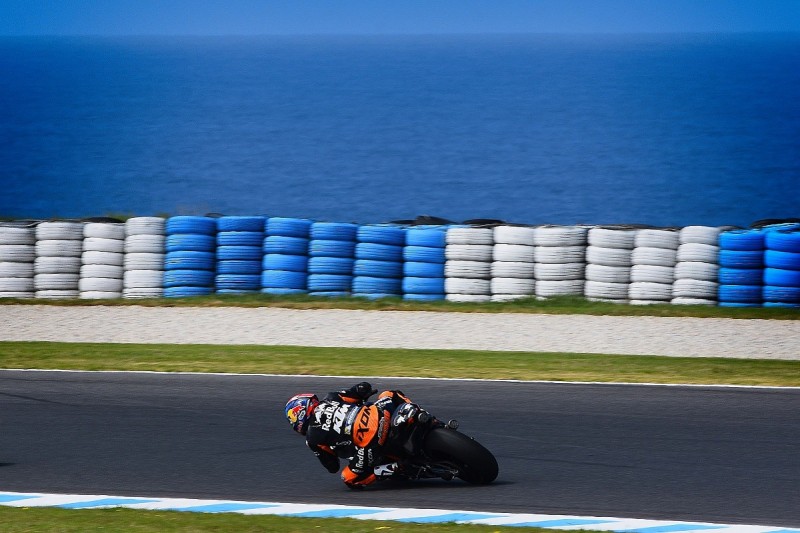 Smith noted that Vinales' advantage at the front of the field on Thursday - 0.462s - had an impact on the overall margins.

"I think anything less than two seconds [off the pace] is acceptable," he said.

"Maverick did a flying lap today, if you look at everybody else, Pol was under the two seconds.

Despite being bottom of the times, Smith says he is satisfied with the progress KTM is making ahead of its first race as a full MotoGP entrant in Qatar next month.

"The package is great, the team is doing a fantastic job," he said.

"The guys react, they know what to do now, it's just the case of me then taking it to that next level.

"I can't say I'm unlocking the full potential when I can do the same lap time on full race distance tyres, especially here at Phillip Island where everybody knows there is quite a drop off here.

"It's just down to me to kind of up my game a little bit."