Pramac rookie Jorge Martin says he was “risking every corner” on the lap which ultimately claimed him pole for the MotoGP Valencia Grand Prix.

Martin claimed the fourth pole of his rookie season when he snatched top spot in qualifying away from Ducati stablemate Francesco Bagnaia by 0.036 seconds after both Bagnaia and his team-mate Jack Miller crashed late on.

It marked the 11th pole of Ducati’s 2021 campaign and ensured it completed its perfect run of having at least one bike on the front row at all 18 rounds this season.

Martin admits his lap was difficult because the grip on offer “is not perfect”, which meant he was forced to take big risks.

“In qualifying as always, we risk a lot,” the Pramac rider said.

“It’s not an easy track because the layout is strange, it’s not normal and also the grip is not perfect here.

“It’s a bit different to other tracks. So, I was risking every lap, in every corner, but finally I could finish this lap.

“I’m really happy. My performance is good, the bike is working good also.

“You can see all the Ducatis are strong, so tomorrow will be a great battle but I think I have the pace to fight for the podiums.”

Bagnaia had just taken top spot in Q2 when he crashed, but believes Martin’s blistering fourth sector meant he was more deserving of pole anyway.

“I feel great, I feel today the pole position was deserved by Jorge, he did an incredible fourth sector,” Bagnaia said. 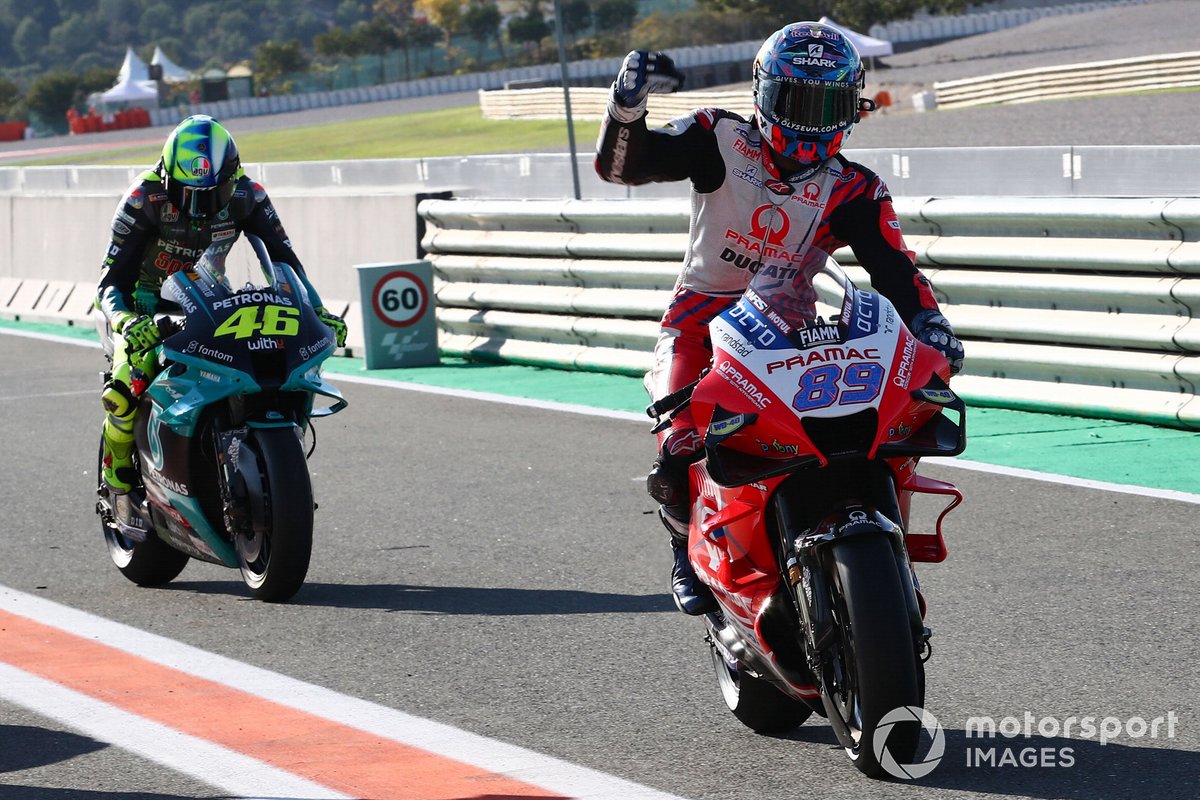 “I’m happy because the FP4 was very good for us, I feel great with used tyres and I think that we have a great possibility to make a really good race tomorrow.”

Miller passed Bagnaia just after he’d crashed and had thus come through a yellow flag zone, so was sure his final lap would be cancelled anyway had he not fallen at Turn 11.

Having been on a lap that could have challenge for pole but wouldn’t have counted, the Australian says he was still pushing for “personal glory”.

“I definitely wasn’t leaving anything on the table, that’s for certain,” Miller said.

“I did a good run on the first tyre and felt comfortable, and that second one I sort of messed up the first two laps.

“I didn’t really get through the first sector, so I got the last one right.

“I’d actually seen the yellows for Pecco – Ok, he was back on the bike, but I knew that ultimately the lap would have been taken away.

“But that was more for personal glory anyway, I was going for it.

“And, yeah when that big slide happened through nine, it kind of threw me out a little bit wider than I would have liked going into 11.

“But I was at that point; last qualifying of the year, last lap, last full time attack of the year. I was 100% committed to it and went down with the sinking ship.”