After nine seasons with Yamaha, Lorenzo's best finish in the first three races was ninth at Austin, but he claimed Ducati's first podium at Jerez since 2011 with third in Sunday's Spanish Grand Prix.

Lorenzo's form has been widely discussed, with racer-turned-safety representative Loris Capirossi among those weighing in, saying his style was not "wild" enough.

Asked whether the progress was his or Ducati's, Lorenzo said: "It's a combination of a lot of things, mainly kilometres that I needed with this bike, [because] this bike is special.

"When I joined in 2008 in MotoGP, suddenly I was fast because the bike was like made for my riding [style].

"But you know, in other categories took me a long time to understand certain things and with this bike it is happening more or less the same.

"You don't have to doubt about my riding, my mentality, and some people did.

"They spoke too early and finally they have to take their words in their mouth because you cannot doubt about any rider in the championship.

"All the riders that have come into the world championship, they are very, very good and can be at the front - but especially a rider who win many races and titles."

The Spaniard said his podium finish from eighth felt like a win, having been encouraged by his practice pace before a disappointing qualifying session.

It was his eighth podium in 10 MotoGP starts at Jerez, a circuit where he felt he could make a difference. 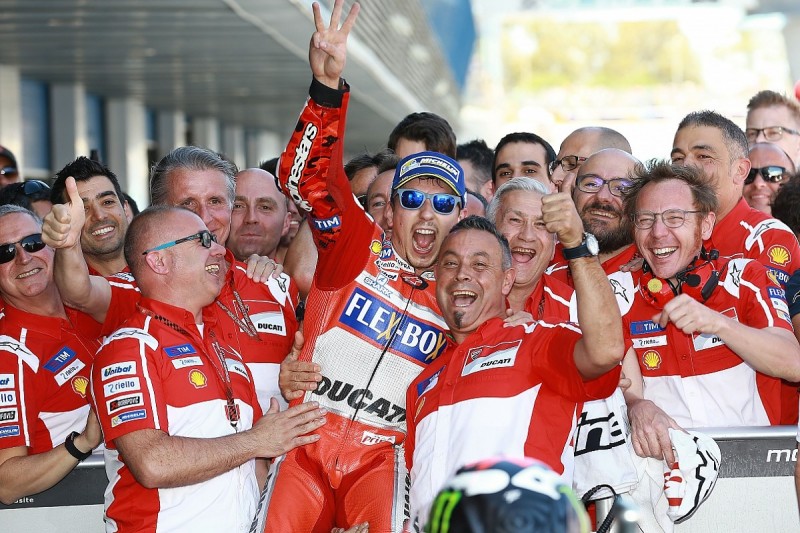 "In that moment you are focused on riding but you don't know which position is your more realistic position," he said.

"Maybe Zarco is going to go away, maybe you are catching up.

"But when I start catching up I thought to myself, 'Maybe I can finish the podium'.

"Then when I overtook him it was difficult to keep believing when I was tired that I could escape but finally +0.3, +0.5 [was on the pitboard], I tried to push even harder with moving bike and finally it went our way.