Jorge Lorenzo says he and Yamaha team-mate Valentino Rossi are effectively starting a whole new season, in the fight for the MotoGP championship

With his fifth victory of the campaign at Brno, Lorenzo drew level at the top of the standings with Rossi, who has led since Qatar's season opener.

While Lorenzo would currently win a third title on a countback based on race victories, he says that the board been wiped clean with seven races to go.

"I'm very happy to be leading with Valentino, because it's been two-and-a-half years that I wasn't leading the championship," Lorenzo, who was last atop the standings following Qatar's 2013 round, said.

"With Vale, we start another championship together, from zero, like the first race.

"We'll see what happens in the last races."

While Rossi has finished all 11 races on the podium, Lorenzo has two more victories, and dominated at Brno to lead his team-mate home by 10 seconds.

Silverstone's next round is a happy hunting ground for Lorenzo, who has won the British MotoGP at the venue on three occasions, and he acknowledges fine margins will be a factor on the run to Valencia's season finale in November.

"I think we are very similar, our riding," he said of the pair's strengths and weaknesses.

"We are very smooth, we carry a lot of corner speed, we are very consistent during the race and we don't make a lot of mistakes.

"Maybe he brakes harder and later, because of that he probably he has some advantage in a fight. But I carry more corner speed.

"If I feel right on the bike, I can be very fast but also very consistent with my times, so it depends on the track, how we feel.

"This can make the difference in the next races." 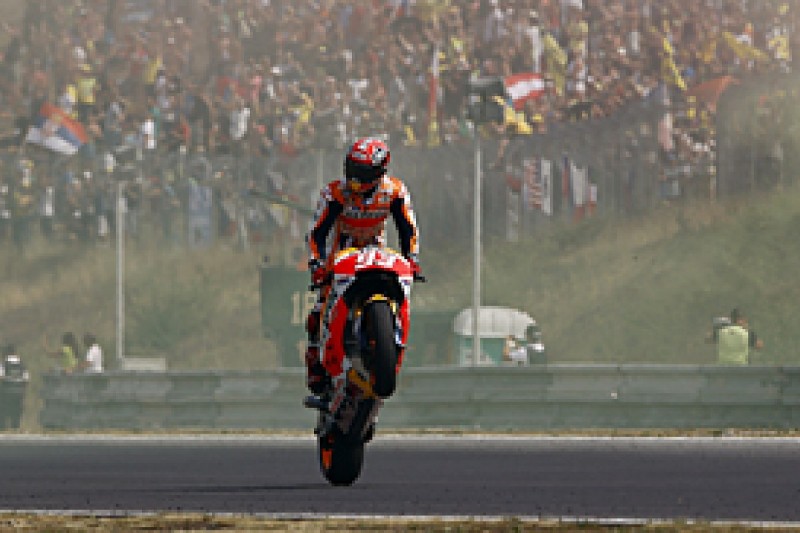 While reigning world champion Marc Marquez took points out of Rossi in the title fight with his second-place finish, he left the Czech Republic 52 points behind the Yamaha pair.

Lorenzo knows that the Honda rider's job is harder as a result, but will not rule him out.

"It's not only the points we recovered with Vale, but also with Marc, who I believe is one of the favourites for the championship," he said.

"After this race, probably his possibilities reduce a little bit.

"But for sure he will push to the end. He's won on the tracks, so we have to pay attention to him."

LEADING RIDERS' STANDINGS AFTER 11 OF 18 ROUNDS:

Valentino Rossi: I had no rhythm in Brno MotoGP defeat

Marc Marquez resigned to Honda struggling at MotoGP starts in 2015