Jorge Lorenzo believes he can still start his first MotoGP race with Ducati on the front row of the grid, despite missing the automatic Qatar Grand Prix Q2 cut-off

Lorenzo finished the first day of running at the Losail circuit in fifth place, but was eighth and ninth-fastest in Friday's two sessions.

That and gains by other riders left the Spaniard 12th in the combined practice order, with only the top 10 progressing automatically to the second phase of qualifying on Saturday.

Lorenzo will therefore be one of 13 riders chasing the final two Q2 places, via the 15-minute Q1, but he still believes he can challenge for a place on the front row.

"If we improve the small parts that we lost today, having the same gains that we had today, we can fight for the first row or the second row," he said.

"Every time I feel better. To be more consistent in the race, that is the most important thing.

"Because if you are on the first row or the second row then in the second part of the race you are one second slower, it doesn't matter." 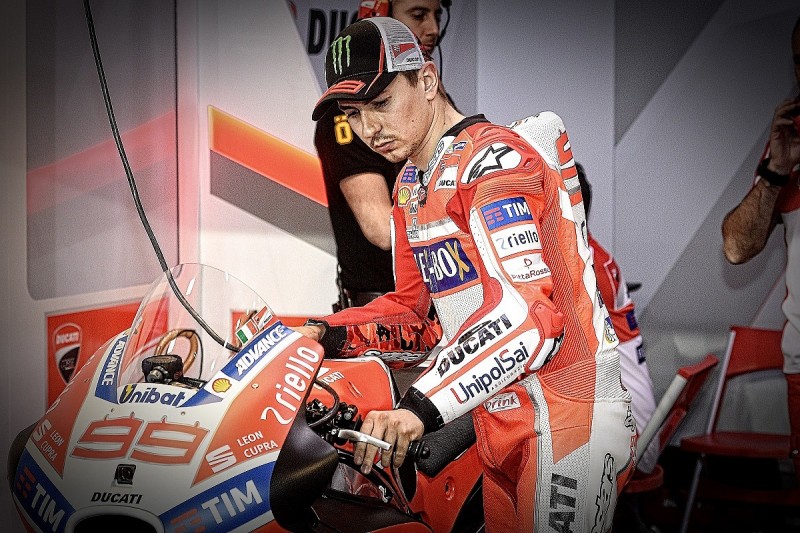 The Spaniard believes he took a step forward with the consistency of his Desmosedici on Friday, namely on corner entry and exit.

However those gains came at the expense of mid-corner speed, and some of what he feels would help him set a quick single lap.

"I think we are better than yesterday," Lorenzo insisted.

"Yesterday, we were competitive on a better track and also for one or two laps.

"Today it was a much worse track, track [conditions] that don't suit the Ducati with a lot of wind and not very grippy.

"We have been quite consistent, more consistent than yesterday, and this is a good sign.

"With this new setting I feel better, I get less tired, and I can keep a more consistent pace, even if probably we lose some little points on the track and we lose a bit of explosiveness.

"In general, the consistency has been a huge improvement and tomorrow we will try to change a bit more the setting so we don't lose in those areas, and to keep the good improvement we made today."