Rossi's victory in a wet British Grand Prix last Sunday reopened a 12-point championship advantage after Lorenzo had drawn level - and in front on countback - with victory in the Czech Republic a fortnight earlier.

Lorenzo believes having twice come from behind to catch Rossi during the year proves he can still overhaul his team-mate over the remaining six rounds.

"There are still six races to go and we are going to try to recover the points like we've done two times this year already.

"There is only one rival, one rider who I must keep focus on: Valentino.

"I believe in dry conditions I have a little bit more speed and I will work to keep it like that in the next races.

"And because of this I have more possibilities to finish in front of him in the next races and recover more points in the future."

Rossi agreed that a 12-point cushion over Lorenzo was little comfort.

"It's not important, zero. Jorge is strong," he said.

"It's an important 12 points, but not a lot of psychological advantage, unfortunately.

"It's important to remain on top, because I was first from the first race.

"Jorge got within one point after Barcelona, but then he went down.

"He arrived equal after Brno, but he's never been one point in front.

"To reopen the gap is fantastic because on paper [Silverstone] was a track where Jorge could have beaten me."

Lorenzo was the faster of the Yamahas through practice and qualifying at Silverstone before being outpaced when it rained for the race. 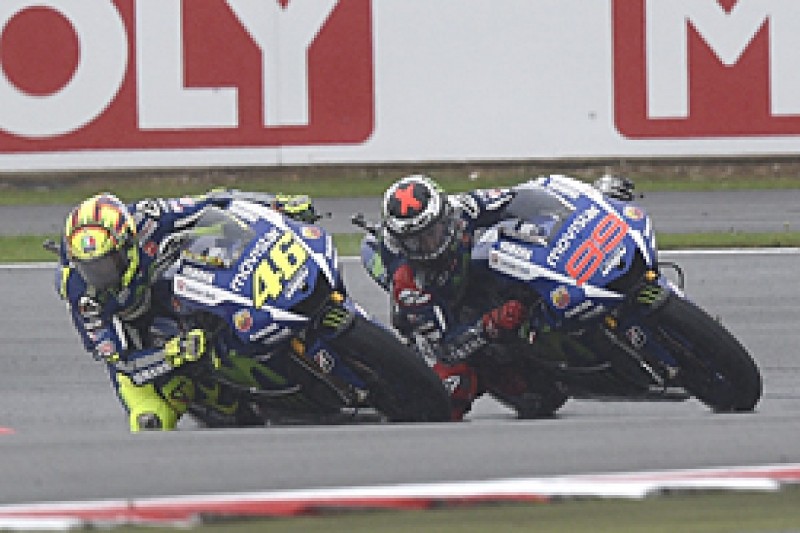 He was also hampered by a brush with Tech 3 Yamaha rider Pol Espargaro - where Lorenzo said it was "a miracle" he did not crash - and a loss of visibility as his visor fogged up late on.

"Rain is always difficult. Sometimes you feel very good, like for example at Aragon when I won last year," Lorenzo said.

"Sometimes it's difficult when the track is very slippery. Sometimes I don't feel it.

"Valentino could brake later, I wasn't able to ride like him.

"We have to take the positives in the result. In dry conditions I was expecting to fight for victory and finish first or second.

"But the conditions changed and that can happen. This time it worked better for Valentino."