Pedrosa revealed ahead of last weekend's Le Mans race that a pocket of fluid had built up around his hip after he was launched from his bike in an incident with Ducati riders Jorge Lorenzo and Andrea Dovizioso at Jerez.

He explained that although he would like to have the fluid drained and rest, a demanding schedule of testing and races was preventing him from doing so.

Pedrosa took part in a post-race test at Jerez the day after his crash, and then rode in another test at Mugello later that week before heading to Le Mans.

The Spaniard was also due to take part in a Michelin tyre test at the newly-resurfaced Barcelona track on Tuesday, but poor weather has led to this being rescheduled for Wednesday.

"All weekend [I was] struggling a bit [with the pain]," admitted Pedrosa. "We have to see how I can handle this for the next race.

"[This week] I will check to see what the possibilities are. At this moment I know it's just [a case] to rest, but the calendar doesn't allow me to. 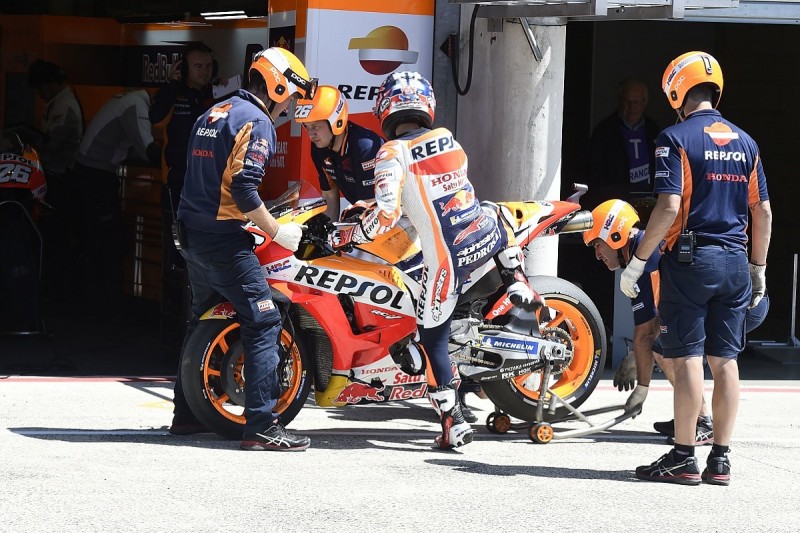 "That's why we are trying to understand what I can do with the hip.

"Normally riding on track makes the area swell, and I guess after the test [at Barcelona] it will swell a little more. "If the situation doesn't improve, something will have to be done."

The Jerez race marked Pedrosa's second non-finish of 2018 after Johann Zarco forced him onto a wet patch in Argentina last month, causing him to crash out and injure his right wrist.

Despite the discomfort of his swollen hip, Pedrosa still managed to salvage fifth place finish at Le Mans - which marked his best result of the season so far.

"It was important after the crashes in Argentina and Jerez to [finish] and take some points, get some momentum, some confidence," added Pedrosa.

"[It was a] decent result, considering the weekend and the possibilities and my potential, [and] positive to recover five places from the grid in a not easy situation."