Marc Marquez already sealed his sixth riders' title earlier this month at Buriram, and two weeks later he put the manufacturers' prize beyond reach of Honda's rivals at Motegi.

The Spaniard's latest victory in Australia last weekend means that the Repsol Honda team is now only one point behind the factory Ducati squad in the race for the teams' title, a prize that would complete a Honda triple crown for a third successive year.

Of the 408 points scored by the team this year, 375 have been earned by Marquez, with Lorenzo contributing only 23 - and test rider Stefan Bradl the remaining 10.

By contrast, Ducati's tally of 409 points is split roughly 60-40 between Andrea Dovizioso, who has secured second in the riders' standings, and Danilo Petrucci.

"It would be great to get the triple crown," said Puig. "Marc is trying very hard, and winning that teams' title in the current circumstances would be incredible.

"The negative point in Phillip Island is the situation and the result obtained by Jorge Lorenzo." 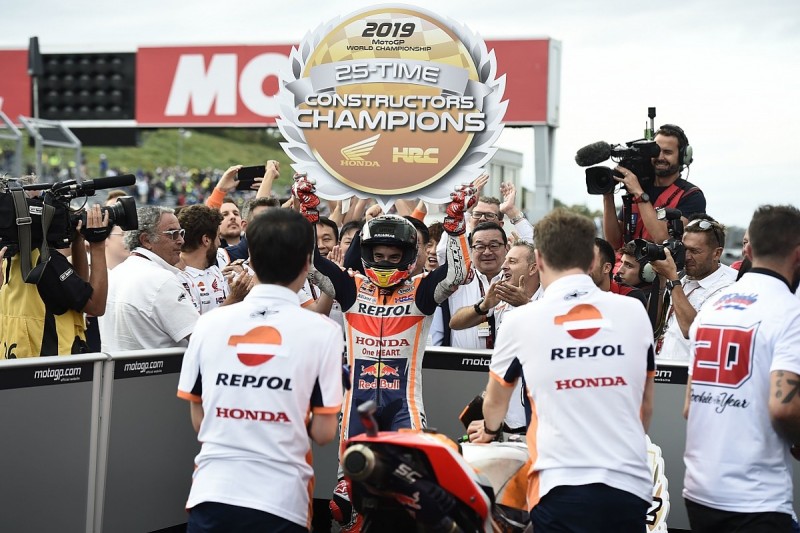 At Phillip Island, Lorenzo finished outside of the points for a fourth successive race, 16th and last of the finishers and over a minute behind Marquez.

The struggling 32-year-old was a full 26 seconds down on 15th-placed Hafizh Syahrin.

"The result is very bad," admitted Lorenzo. "Of the riders who finished I was last. At this track I did not go well in recent years and it was also very cold and windy.

"I tried to save the tyre on the left side as much as I could, but I did not succeed and the last laps were very bad.

"I already knew I was going to suffer, you wait for things to change but they don't. In Malaysia, under normal conditions, we hope it goes better.

"We are a point away from the triple crown, something to which I am not contributing much. Marc winning the race comes as a surprise to me."

Dovizioso "not that happy" to be '19 MotoGP runner-up