Marc Marquez says Honda still has a lot of work to do on power delivery, despite his podium finish to start the MotoGP season in Qatar

Of the major manufacturers, Honda has struggled the most with MotoGP's change to a control ECU, with Marquez encountering with an engine-brake issue during first practice for the season opener after a setting change went wrong.

Honda got on top of that and the two-time MotoGP champion was able to qualify on the front row and finish the race third, having passed Ducati's Andrea Dovizioso to briefly run second in the closing laps.

Despite the promising result, Marquez acknowledged Honda was still struggling with acceleration.

"We had a difficult winter and if on Wednesday you told me, 'you will finish on the podium', I would say 'where do I need to sign?'," he said.

"We worked really hard all weekend trying to find the best base, the best package for the race.

"We lose a lot there, even in the race, so for that reason it was really difficult to overtake Dovi, but anyway I am very happy with the work of Honda.

"On a circuit where two weeks ago we were one second slower per lap than these two guys, we are here and just finished two seconds behind Jorge [Lorenzo]."

Team-mate Dani Pedrosa did not have any of the high points or breakthroughs Marquez enjoyed during a mixed pre-season, and that largely continued in Qatar.

Pedrosa finished 14s behind the lead quartet in what he said was a lonely but better-than-expected fifth place.

"To be honest, I expected worse, because all of my pace and laptimes from the winter test were quite bad," he said.

"As well here in practice, although I made a huge step compared to the test.

"I was more happy during the weekend, but I knew my pace was not the one for winning the race.

"I knew I had a tough race in front when I started, but anyway, I tried to stick on the first group but from the first lap I could see my corner speed, my line and everything was not a good one and I was not able to match their laptimes.

"We need to change something on the bike so I can be faster around the track, around the corners for the next GP." 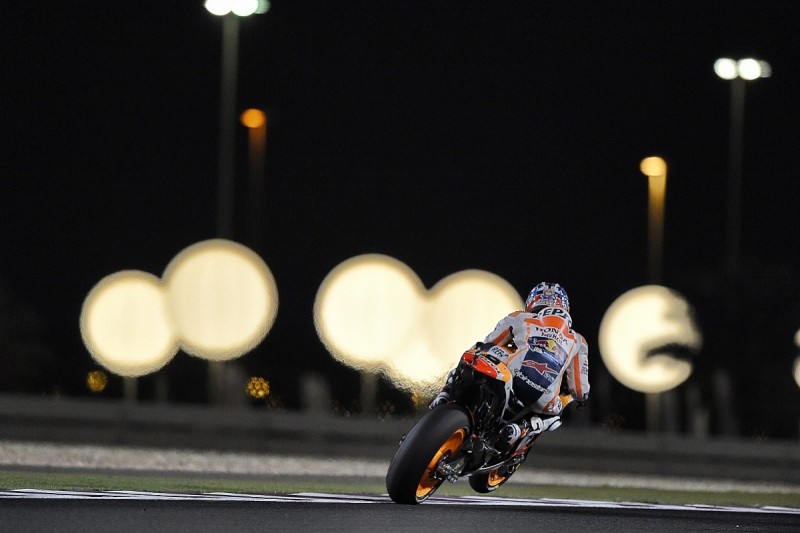