The dry conditions in FP3 meant improvements on Friday afternoon's best efforts were immediate, with Quartararo the first big mover on the combined order as he leaped from 11th to third.

Petronas SRT team-mate Franco Morbidelli improved to second, while Valentino Rossi on the works Yamaha moved up to sixth.

Yamaha took control of the top of the timesheets from this point, with Quartararo going even quicker with a 1m33.301s before Morbidelli edged ahead with a 1m33.279s.

Quartararo once again deposed his team-mate with a sequence of session-best laps which culminated in a 1m32.974s.

The Frenchman returned to top spot with 12 minutes to go following another brief spell leading the standings by Morbidelli, with Quartararo lowering the pace to a 1m32.319s as the rest made their final bids for direct passage into Q2. 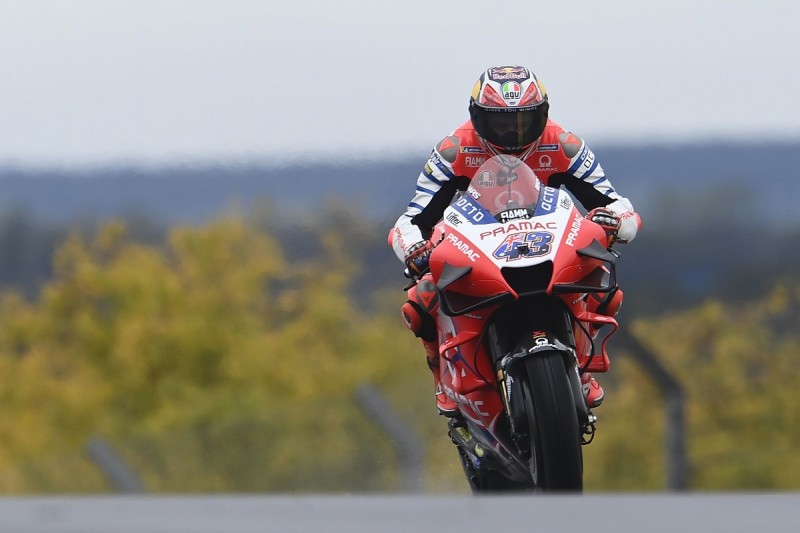 Quartararo's lap stood as the benchmark through to the end of the session, while Tech3 KTM's Miguel Oliveira ended up his nearest challenger 0.130 seconds with a last-gasp effort.

Morbidelli completed the top three ahead of Miller, who suffered a nasty off-throttle highside at the Garage Vert right-hander on an out-lap in the closing stages.

Maverick Vinales initially rounded out the top five on the works Yamaha, but was dropped to eighth place as his best lap was deleted for being set under yellow flags.

That change pushed Cal Crutchlow up to fifth as he bagged himself a place in Q2 on the LCR Honda.

A late improvement for Avintia's Johann Zarco to sixth knocked KTM's Brad Binder down into 11th, while Rossi was resigned to seventh after crashing at the Dunlop chicane late on.

With Vinales in eighth, he stayed ahead of Pol Espargaro on the KTM and the factory Ducati of Andrea Dovizioso as the final riders to bag a direct place in Q2.

Mir crashed his Suzuki at the second corner in the final two minutes when he lost the front end without any warning under braking, with late improvements for others shoving him into a volatile Q1 group in 12th.

He'll join Ducati's Danilo Petrucci and his Suzuki team-mate Alex Rins, who lost the first 15 minutes of FP3 to a crash at the Dunlop chicane.