Fabio Quartararo beat Jack Miller to MotoGP pole in a dramatic French Grand Prix qualifying, with Joan Mir only 14th after failing to get out of Q1

When Q2 finally got under way, Yamaha took charge of the top of the timesheets as they did in FP3 and FP4, with Catalunya poleman Franco Morbidelli setting the early pace with a 1m32.393s.

His Petronas SRT stablemate Quartararo beat this just a moment later with a 1m31.679s, which he improved to a 1m31.665s on the following tour.

Pramac's Francesco Bagnaia split the Yamaha's on the provisional front row in second having come through Q1 alongside fellow Ducati rider Danilo Petrucci.

Quartararo's 1m31.665s came under immense threat as the session ticked into its final two minutes, with Ducati's Andrea Dovizioso jumping up to second before the injured Cal Crutchlow missed out by just 0.021 seconds.

Jack Miller toppled Quartararo's time with a 1m31.537s on his final lap, but Quartararo was lighting up the timing screens on his last effort.

Under a tenth up as he entered the third sector, home hero Quartararo monstered the final split to produce a 1m31.315s to claim his first pole since the Andalusian GP in July by 0.222s. 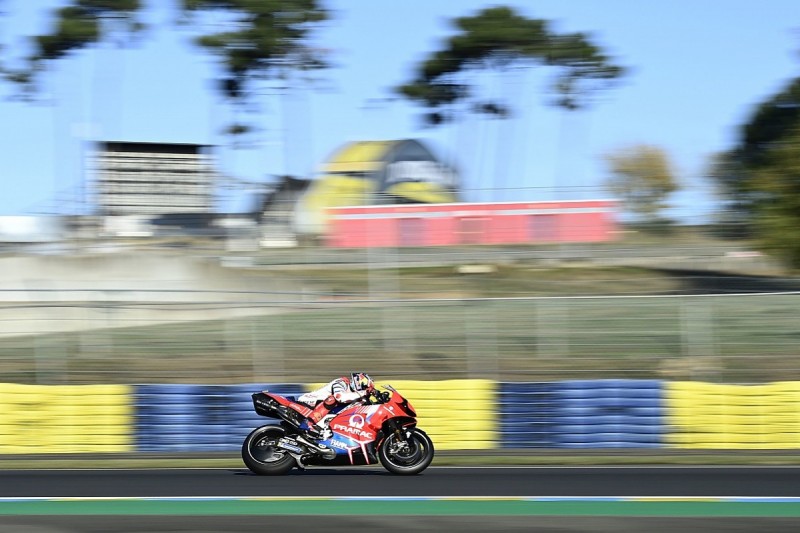 Miller held onto second ahead of Petrucci, who secured his first front row start since the 2019 Italian GP.

Crutchlow will head the second row on his LCR Honda despite still suffering with complications from surgery on his right arm in August, while Maverick Vinales on the Yamaha and Dovizioso line up alongside him.

Bagnaia was shuffled back to seventh but stayed ahead of Pol Espargaro's KTM and Johann Zarco on the Avintia Ducati.

Valentino Rossi put in a charge for pole late on, but could only manage 10th on his Yamaha ahead of early pacesetter Morbidelli and Oliveira.

Mir's difficult Saturday continued into qualifying, after a crash in FP3 left him stranded in Q1.

The Suzuki rider did hold a Q2 place in the closing stages of Q1, but his 1m32.187s wasn't good enough to stop Pramac's Bagnaia from demoting him, with LCR's Takaaki Nakagami worsening the situation by jumping up to 13th.

Mir's 14th is his worst qualifying of the year and he will be joined on the fifth row by Aprilia's Aleix Espargaro, with the sister Suzuki of Alex Rins only 16th after suffering another crash in FP4.

A late crash for Brad Binder at the Musee left-hander stopped him advancing on 17th on the KTM, with Alex Marquez shuffled back to 18th on the Honda after an early stint in the top two.