No action was taken at the time, with the clash deemed a racing incident following an FIM hearing on Thursday at the Red Bull Ring with Espargaro and Oliveira.

In an interview with French network Canal +, Oliveira also said Espargaro gets "too emotional" on track and that "not everyone is born with the same intelligence".

"I don't want to attack Pol, but I think he either gets too emotional and maybe doesn't think so much," Oliveira said last week.

"Unfortunately, not everyone is born with the same intelligence and sometimes it's hard to have this and think during the race when you are on the bike.

"We are competing, we have a lot of adrenaline, but we have to manage what we think.

"So, it is not something that is given to everyone." 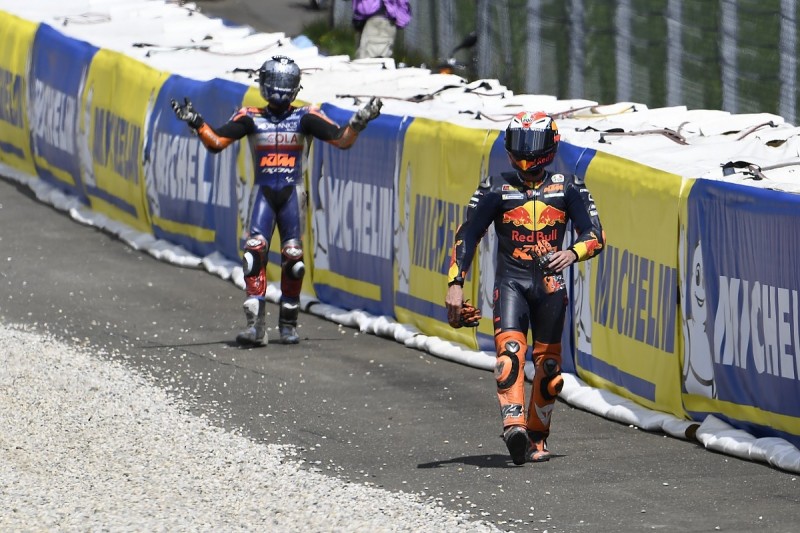 Ahead of this weekend's Styrian GP at the Red Bull Ring, Espargaro reacted to Oliveira's comments and was disappointed that there was no apology from the Tech3 rider.

"I was really shocked, because I thought our relationship with Miguel was very good," Espargaro said.

"I've been in that situation many times where maybe sometimes it was my fault and I was really hot.

"But I never missed the respect for my rivals, even for a team-mate.

"So those were not good words and I heard him [in his debrief earlier] to the press and he wasn't even saying sorry.

"I would never say that we are all not born with the same intelligence, it's pretty hard, and especially because the bike he is riding is the bike I have made.

"So, it's not good for sure, and for sure a huge lack of respect.

"I think he was in a hot moment and I'm pretty sure he knows he didn't use the best words to explain the situation, especially that one which wasn't really my fault."

Crutchlow "confident" of remaining in MotoGP next year