The cooler track conditions caught out a couple of riders in the early stages of FP3, with Pramac's Jack Miller crashing at the first corner just a few minutes in.

This was followed shortly afterwards by Tech3's Miguel Oliveira, who slid off his KTM at the Turn 8 Quercia corner.

Improvements on the combined times were, as ever, few and far between in the opening stages, with Bagnaia moving into a provisional Q2 place in 10th when he went fastest on the individual FP3 timesheet with a 1m32.049s.

The next relevant combined order change came from Andrea Dovizioso on the factory team Ducati, with his 1m31.955s putting him into eighth overall and top of the FP3 times with just under 13 minutes left.

A few minutes later, Bagnaia began lighting up the timing screens and demolished Maverick Vinales' pole lap record from last Saturday to go fastest of all with a 1m31.127s.

As the field wound up for time attacks at the end of the session, several riders pushed over the limits and ended up on the deck.

Pol Espargaro, for the second FP3 in a row, crashed in the crucial time attack stages, but got away with it and held onto a place in Q2 in ninth. 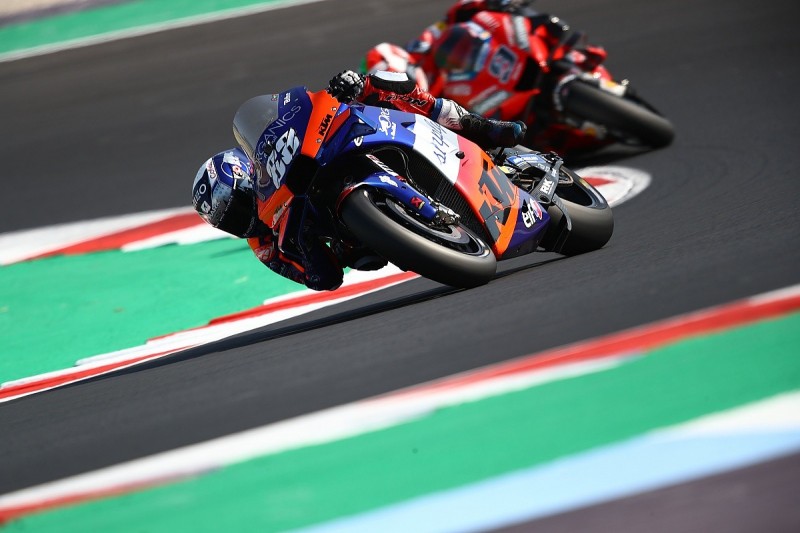 Fellow KTM rider Oliveira crashed again, this time at the Turn 15 left-hander, and took some time to get to his feet after a fast tumble.

At the same moment, Bagnaia crashed at the Turn 6 left-hander where Espargaro crashed just a minute earlier.

But Bagnaia's 1m31.127s would remain intact as the chequered flag brought the session to a close.

Vinales came close after a tough session for the factory Yamaha rider, with numerous changes to the front of his M1 in a bid to find better grip seemingly not paying off as was repeatedly caught shaking his head on the bike.

The Spaniard ended FP3 second and just 0.058s off the pace, with Fabio Quartararo completing the top three on his Petronas SRT Yamaha ahead of team-mate Franco Morbidelli - who is still suffering from the stomach bug which forced him out of Tuesday's test at Misano.

Joan Mir was fifth on the Suzuki ahead of Friday pacesetter Brad Binder on the KTM, with Takaaki Nakagami (LCR), Valentino Rossi on the Yamaha, Espargaro and the works Ducati of Danilo Petrucci booking the final direct Q2 places in a top 10 covered by just 0.574s.

No late improvements for the likes of Miller, Avintia's Johann Zarco in 12th, 14th-placed Dovizioso and Suzuki's Alex Rins in 17th have created a volatile Q1 group for the first part of qualifying.

Espargaro's practice crash result of a MotoGP tyre he "cannot use"