Ducati's Petrucci has 'worst day since joining Ducati' in Argentina

While Andrea Dovizioso and Jack Miller ensured Ducati locked out the top two times on the opening day of track action at Termas de Rio Hondo, Petrucci ended up down in 13th place.

It followed a crash at Turn 1 during the morning's opening session which, combined with a problem on his spare bike, left the Italian rider down in 20th place.

"Sincerely it was the worst day since I joined the [factory] Ducati team," Petrucci admitted.

"I made a mistake this morning trying to push as much as possible and maybe the track was not ready and I crashed because there was not so much grip.

"I am not happy, but I am confident we can recover the time and stay closer to the front."

Speaking in more detail about the crash, he added: "[It was] very strange. The front [wheel] locked, this happens when you don't have a lot of grip on track.

"I braked hard and I crashed when I was almost straight. I lost the feeling.

"I was so unlucky that when I crashed and I came back to the pits, I switched bikes and the second bike had a problem. 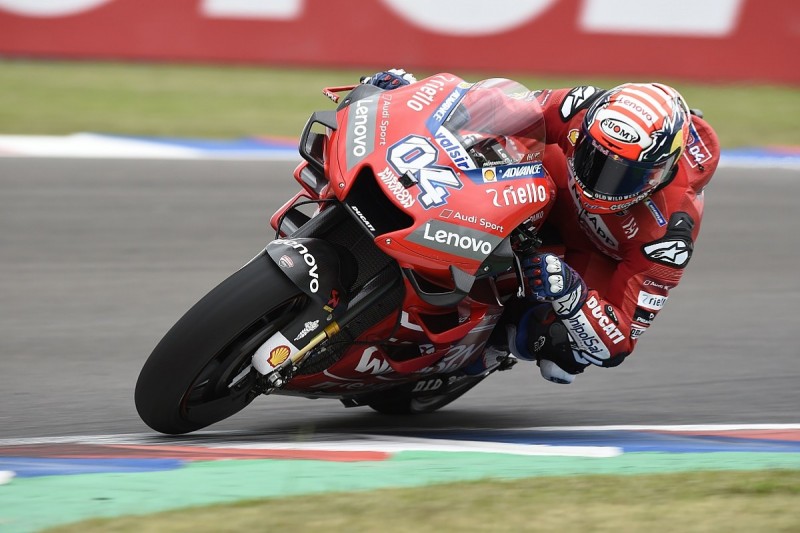 Andrea Dovizioso left it late in FP2 to pip Jack Miller by just 0.009 seconds and head up the timesheets at a track that has not favoured Ducati in recent years.

The 2017 and '18 runner-up declared himself "really happy" with the outcome, highlighting the improvement the team has made in the last 12 months, but believes the pace on Saturday will be even faster.

"I was surprised, but first position is not important, especially when we are very close," said Dovizioso.

"That's not the point.

"Our base is good, so I was able without pushing a lot to have a good laptime and that give us the possibility to work on some set-up.

Asked if he expected a repeat of Qatar's frenetic pack race in Argentina, he replied: "I don't think so, also because the [tyre] consumption here is less than Qatar."