Having finished a lowly 11th on his debut with the Italian manufacturer in Qatar, Lorenzo qualified 16th in Argentina and only made it as far as the first corner, crashing after tagging the rear wheel of Andrea Iannone's Suzuki.

Lorenzo gained several places on the run to Turn 1 and moved from the outside to the inside, as an unsighted Iannone also headed for the apex.

Spat to the outside of the circuit, Lorenzo says he was lucky to not be collected by Loris Baz, but that that was the only positive as he looks to continue to learn Ducati's Desmosedici.

"It was a nasty crash," Lorenzo, second from right below, said post-race. 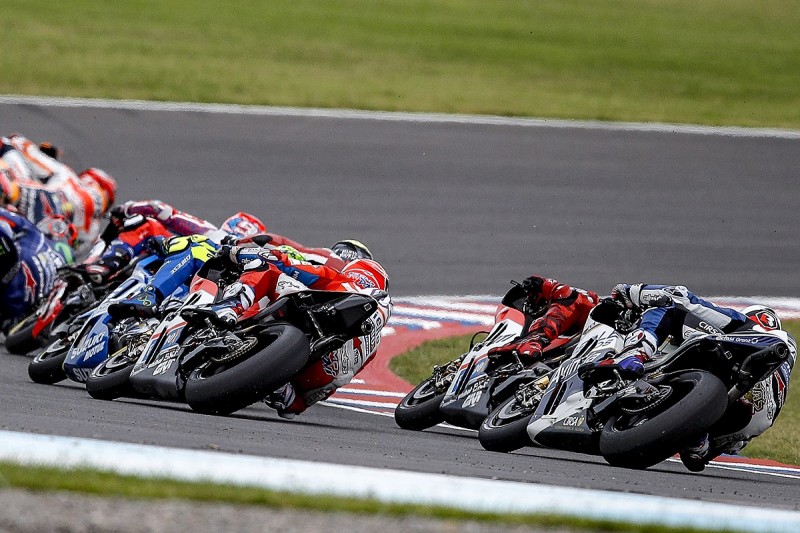 "It was a long time ago, maybe Australia 2009, that I don't make the first corner, very disappointing.

"I needed more than ever to find the kilometres and the laps to keep the improvement we made during the weekend with the position of the bike, with the way of riding using more the rear brake to stop the bike.

"In the warm-up I felt very good, got a good start, but on the first corner I decided to go into the inside, there was a lot of bikes there and somehow I found the rear wheel of Iannone.

"I touched him just a little bit and the bike was going into the other side and I crashed. Very disappointed.

"It's a bad moment, still 10, 12 days [before the Austin round] to get on the bike again. I would like to go now or tomorrow.

"It's difficult to accept, but at least I'm not injured, we found especially a good way to be more competitive in the future."

Lorenzo leaves Argentina 18th in the championship and last of the eight Ducati riders in the field.

That position even eclipses his 16th after two rounds in 2014 when he crashed on the first lap in Qatar and finished 10th in Austin after being distracted by mosquitoes and jumping the start.

"Qatar was quite a disaster, I was lucky to finish 11th because of a lot of crashes," he said.

"And [in Argentina], my race didn't exist. In Austin we will start our championship."