The new deal covers the 2022 to 2026 MotoGP world championship seasons, with the Italian manufacturer becoming the second marque to confirm its long-term motorcycle grand prix racing plans after KTM reconfirmed its place in MotoGP until 2026 last week.

Ducati has been ever-present on the MotoGP grid since 2003, winning its first race after only six grands prix with Loris Capirossi taking victory at the Catalan GP, before Ducati went on to win the riders', constructors' and teams' world titles in 2007 with Casey Stoner.

Last year, Ducati won the MotoGP constructors' world championship, denying Suzuki a clean sweep of top honours, and to date it has 51 wins and 160 podiums in the premier class.

"Racing has always been a truly fundamental part of the Ducati brand and will remain so in the future," Claudio Domenicali, Ducati CEO, said.

"In fact, it represents not only a way to fuel the passion and cheer of the Ducatisti all over the world, but also an advanced research laboratory where the most sophisticated materials and the most innovative design methods are tested.

"This renewed agreement confirms that, while we plan to continue to expand our product range outside of the world of sports bikes, the track and high-performance motorbikes remain a central element for Ducati." 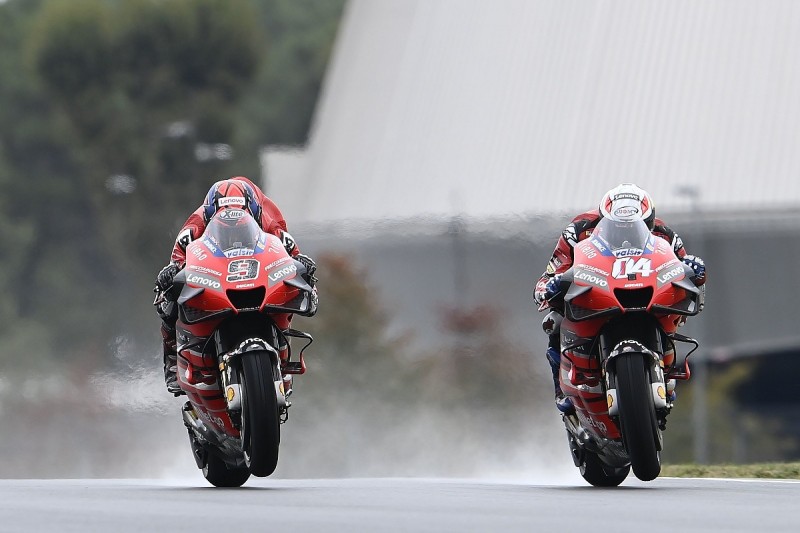 For 2021, Ducati has shaken up its rider line-up with both Jack Miller and Francesco Bagnaia promoted to the factory team following the departure of Andrea Dovizioso and Danilo Petrucci.

Ducati will continue to support satellite teams Pramac and Avintia in 2021, with Pramac running two factory-spec GP21 machines for Johann Zarco and rookie Jorge Martin, while Esponsorama Racing - formerly Avintia - welcomes a pair of debutants in Luca Marini and Enea Bastianini, who will ride the team's GP19 bikes.

"We are happy to be able to confirm our participation in MotoGP until the end of 2026," Gigi Dall'Inga, general manager of Ducati Corse, added.

"In recent years the Desmosedici GP has proven to be one of the most competitive bikes on the grid, and the 2020 constructors' title is further proof of this.

"Even though this year's regulations will not allow for significant technical developments, we will face the 2021 season with the same passion and dedication.

"The goal is to fight for the MotoGP title with our new riders and prepare the groundwork for our future commitment to the championship."

While only KTM and Ducati have committed to MotoGP futures beyond this year, the four remaining manufacturers - Yamaha, Suzuki, Honda and Aprilia - are expected to remain on the grid in 2022.