At the start of the final lap of the wet-weather event, the Ducati rider looked set to finish runner-up to Marquez - but a major moment at Turn 8 for the Honda rider allowed Dovizioso to line up an overtake three corners later.

Dovizioso then prepared for Marquez's inevitable retaliation at the final corner, allowing the Spaniard to run wide down the inside as Dovizioso got better traction out of the corner to arrive at the chequered flag 0.249s earlier.

"I was losing a little bit, maybe it wasn't enough to try to overtake him in Turn 11 with that gap, but maybe he was pushing too much, he did a mistake, and I knew I had to do everything perfect in two corners to be ready in Turn 11.

"That was already, at the beginning of the lap, my strategy, but it was difficult because he was making a good laptime."

The conclusion to the race was almost a carbon copy of the two riders' duel in Austria earlier in the season - where Marquez likewise tried a last-corner lunge, went wide and lost out to Dovizioso on traction. 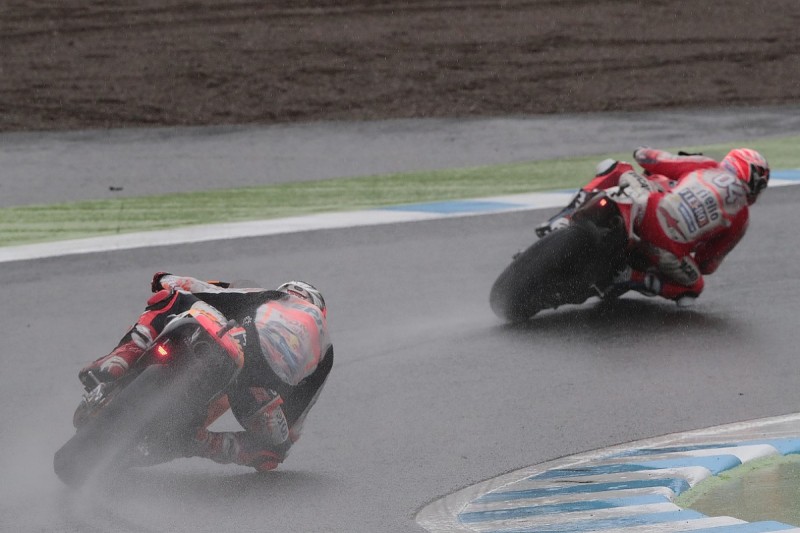 The Italian said the approach to the final corner was firmly on his mind as soon as he passed Marquez.

"I had to try to make a wide left corner, and it was the right decision, because I close the door, because for him it was very difficult to try to overtake me. And when he did, he couldn't change direction very fast.

"It was so exciting to win this race. To fight with Marc is always, you have a big tension, and it was also important for the championship."

The Italian admitted he "didn't feel so good" in the early stages of the race, and reckoned he didn't have the pace of the two riders ahead of him at the midway point.

"In the middle of the race, I wasn't fast like Marc and Danilo [Petrucci]. And I didn't give up, I had to take some risk to stay with them."

But as Petrucci, on a different tyre strategy, dropped away and settled for third, Dovizioso picked up the pace and passed Marquez with six laps to go - only for Marquez to return the favour three laps later.

"When I overtook him [Marquez], I wanted to make a small gap to not finish the race with him, but I realised I didn't have any more the rear tyre.

"I saw at that time it was just about strategy, to overtake, to be in the right position in the right moment."