Fabio Quartararo recovered from a poor start on his Yamaha to take a commanding victory in the MotoGP Doha Grand Prix, while rookie Jorge Martin scored his maiden podium.

Both Quartararo and factory Yamaha team-mate Maverick Vinales were swallowed up off the line, with the Frenchman working his way up from ninth on the opening lap to claim his first victory since last September’s Catalan GP.

Martin replicated his monster start from the Qatar GP, seizing the lead ahead of Pramac team-mate Johann Zarco while last Sunday’s race winner Maverick Vinales was dropped to ninth.

Alex Rins leaped from eighth to fifth on the opening lap and quickly worked his way into the podium places, while Miguel Oliveira occupied the top five from 12th on his KTM.

Joan Mir followed Rins’ charge from ninth, the world champion putting on an aggressive pass on Fabio Quartararo at Turn 6 on the second tour for sixth.

At the front, Martin kept Zarco at bay, while Rins and the Frenchman engaged over second on numerous occasions – the Suzuki unable to keep the Ducati from blasting him down the straight.

Rins was lucky to stay mounted when tucked the front of his Suzuki at Turn 9 on lap 12, though he somehow saved the moment and held onto third.

Behind, Mir put on another hard move, this time on Ducati’s Jack Miller over fifth.

The pair made heavy contact on the main straight at 200km/h moments later, which was investigated by Race Direction but deemed a racing incident.

While all of this took place, Martin continued to lead Zarco, while Quartararo and Vinales began to ghost their way back into podium contention having been at the outer reaches of the top 10 in the opening stages.

Quartararo passed Rins for fourth at the first corner on lap 15 and snatched third from Francesco Bagnaia at Turn 15 a tour later.

The Yamaha was powerless to defend from the Ducati rider on the straight, but Bagnaia ran wide at Turn 1 and gifted third back to Quartararo.

Quartararo’s charge continued on his countryman Zarco on lap 18, before the Yamaha rider scythed past Martin on at Turn 15 to take the lead. 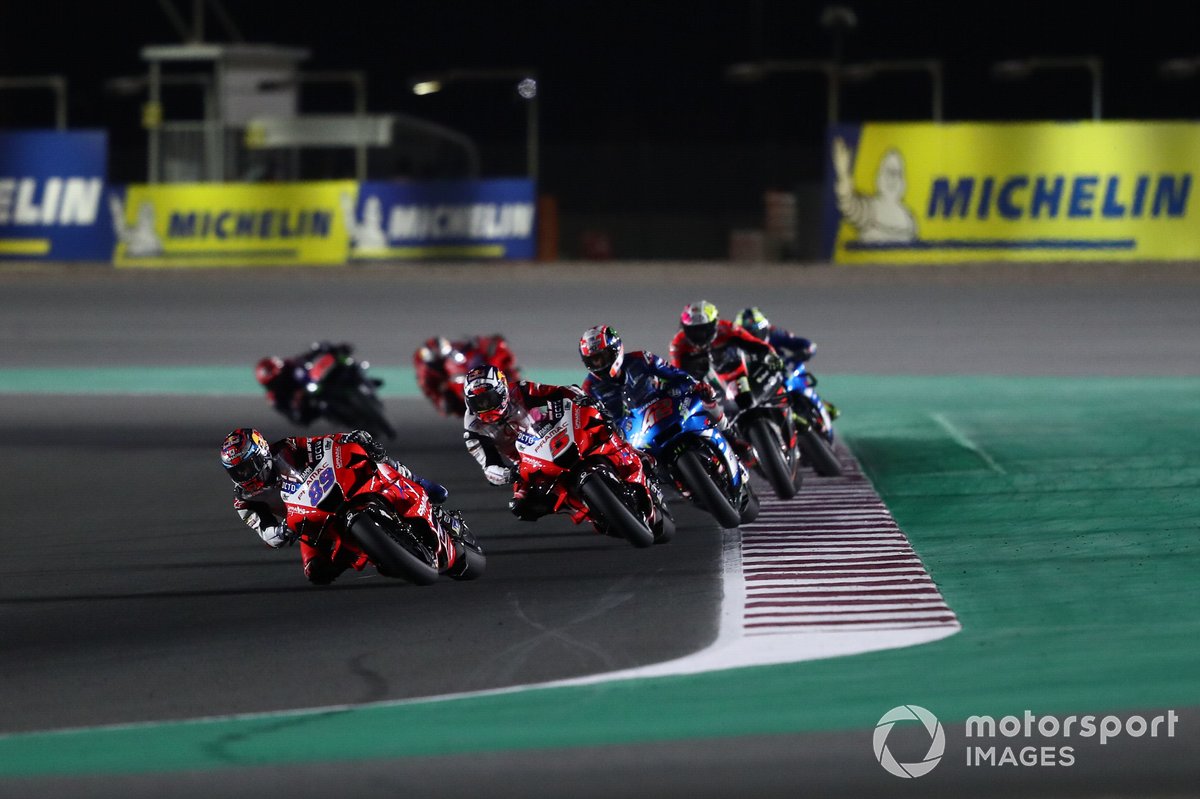 Martin retaliated using the power of his Pramac Ducati on the straight, but Quartararo made his decisive move at Turn 4 next time around.

From there, Quartararo eased away from the rest of the pack to score Yamaha’s second successive win in Qatar by 1.4 seconds.

Zarco got the better of Martin at Turn 15 on the final lap and kept him at bay on the run to the chequered flag by 0.043 seconds in second – Zarco leading the MotoGP standings for the first time in his career.

Rins’ early charge for victory faded in the latter stages, the Suzuki rider fourth in the end having bested Qatar GP winner Vinales.

Francesco Bagnaia was the top factory Ducati team rider in sixth ahead of Mir, while Brad Binder was rewarded with an eighth from 18th on the grid having gambled on the medium front tyre in the race.

He beat Miller, who once again emerges from a Qatar race with a ninth, while Aleix Espargaro completed the top 10 on the Aprilia.

Enea Bastianini recovered from 19th to 11th on the Avintia Ducati, with Franco Morbidelli (Petronas SRT) 12th at the end of a difficult weekend for the Italian.

Pol Espargaro had worked his way onto the lead group in the latter stages, but the Honda rider ran wide at the first corner and dropped to 13th ahead of team-mate Stefan Bradl and Oliveira - completing the closest top 15 in premier class history.

Valentino Rossi could only scrape 16th on the other SRT Yamaha from his career-worst 21st in qualifying, while Alex Marquez (LCR) and Tech3’s Iker Lecuona crashed out.

Zarco leads Quartararo by four points in the standings, with Vinales equal on 36 points with his Yamaha team-mate.