Australian Grand Prix winner Cal Crutchlow had flashbacks to the last-lap crash that cost him a Phillip Island podium with Ducati in 2014, while leading Sunday's MotoGP race

LCR Honda's Crutchlow grabbed his second MotoGP victory in six races, having become the first British winner since Barry Sheene in 1981 at Brno in August.

After claiming second place on lap six, Crutchlow took six tenths out of Marc Marquez's lead and had closed to within 2.4 seconds before the world champion crashed at Turn 4 on Lap 10.

With both riders having made an on-the-grid switch to run Michelin's hardest front tyre, Crutchlow then spent the rest of the race wary of the corner, where he crashed out of second place on the last lap in 2014.

"If Marc crashed at Turn 6, I wouldn't have thought anything of it," he said.

"I crashed [at Turn 4] two years ago, and he crashed on lap nine or something, so I spent the rest of the race thinking, 'this is a disaster!'

"I honestly really didn't brake so much into there, I didn't gain any time there, I just took it quite easy.

"I had some flashbacks from a couple of years ago, there's no doubt about that. 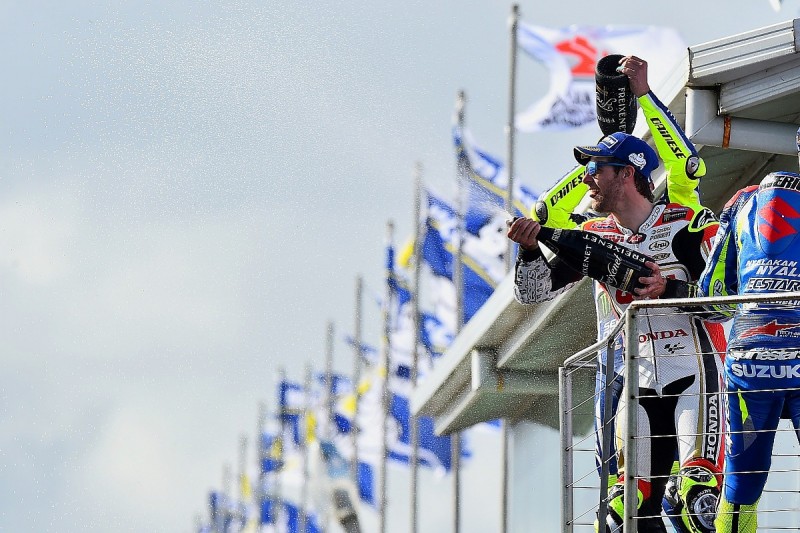 When Marquez crashed, Crutchlow was 1.8s ahead of Yamaha's Valentino Rossi, who had risen from 15th on the grid.

Rossi felt at the time that he would be able to catch and pass Crutchlow, and the new leader had that same fear.

However, while managing tyre temperatures in cool conditions, Crutchlow was able to pull away and eventually win by a comfortable 4.218s.

"I pushed in the laps when the sun wasn't out, because I knew I had to keep the heat in the front tyre," he said.

"And when the sun was out, I took it a little bit easier, as such. I was in a rhythm, so I continued in a rhythm.

"And then it started to go up a little bit, and I rode comfortably. But this is even worse.

"When it starts to go up, you don't know what to do, because you want to push still because you feel OK, but if you don't push enough, you crash with this front tyre.

"I have to say Michelin did a good job, I don't think it was so much to do with the tyre - we knew it was critical, but it was our own choice to go with the hard front."