Friday's two sessions at Phillip Island were marred by heavy rain, with meaningful running limited to the first 20 minutes of the opening session.

Crutchlow led the way in that for LCR Honda, but conditions worsened during the day, and second practice was essentially washed out, which the Briton believes was ultimately the right outcome.

"It's a really difficult situation with the weather, but I think it's the correct decision, to be safe for the riders to stop the practices," he told motogp.com.

"I already said after the first practice it was impossible to ride at the end, so to do Moto2 [practice] and then a [Australian] Superbike race was a stupid decision.

"But the correct decision was to stop for this afternoon.

"When you are doing 320km/h and you can't see the end of your screen, it's quite difficult."

Crutchlow finished first practice 0.053 seconds ahead of Pramac Ducati's Danilo Petrucci, but he was not even wearing his leathers when the second session started, 45 minutes later than scheduled.

Rain is forecast to persist on Saturday, but it is considered likely to clear by Sunday.

"We only did eight laps, I sat out most of the first session as well, because I was quite cold," he said.

"We're going to have to try again tomorrow, we know qualifying probably is going to be wet as well, so we'll see.

"I just hope everybody is on the same line as me with regards to the safety of the circuit.

"We have to be safe, we are all here trying our best to improve the situation with safety, we need to be clever with what we can ride in and what we can't.

"If it was a race, we wouldn't be riding. Let's see what tomorrow brings and also Sunday." 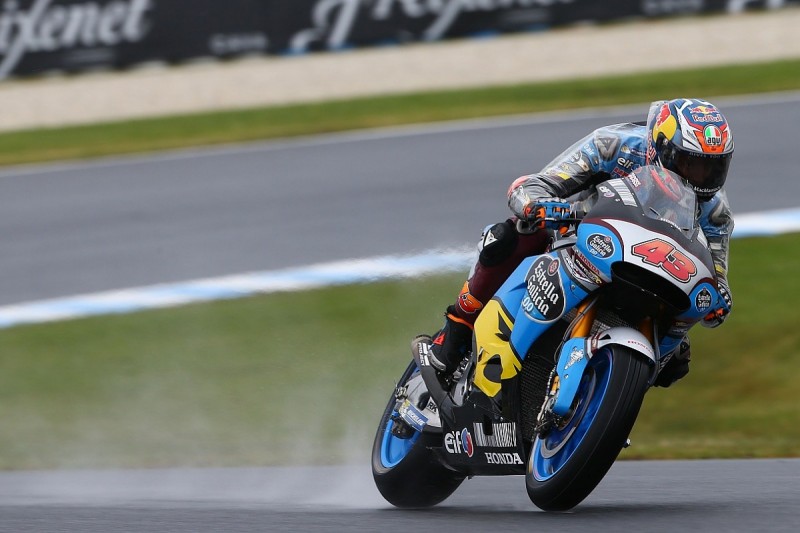 Newly-crowned champion Marc Marquez and Marc VDS Honda's Jack Miller were among the riders to echo Crutchlow's call, Miller describing the conditions as "atrocious" at his home track.

"This afternoon it was far too wet and dangerous," the Australian said.

"It's a shame we couldn't put on a show this afternoon but it was the correct decision to cancel the session because we simply can't ride in those conditions."