The two-time MotoGP champion rode at the Malaysian Grand Prix circuit last week in a private session, and joined the full field for the first of three days of testing on Monday.

Stoner set a 1m59.681s on the 2017 Ducati just after 1pm local time, displacing the Italian manufacturer's race rider Andrea Dovizioso at the top of the order.

Ducati's primary test rider Michele Pirro will take over from Stoner on Tuesday before a decision is made on who will join Dovizioso and Lorenzo on track on the third and final day.

A rain shower hit the circuit at 4pm local time, making the last two hours of available running a write-off, although some riders did sample the wet conditions.

Lorenzo's replacement at Yamaha, Maverick Vinales, was Ducati's closest challenger in third place, and he finished the day 0.447s slower than Stoner with a time of 2m00.128s.

Valentino Rossi was eighth and 0.567s behind his new team-mate.

Aspar Ducati recruit Alvaro Bautista was fourth-fastest on his 2016 Desmosedici, having led the way early, one spot ahead of new Suzuki signing Andrea Iannone.

Cal Crutchlow was the best of the Honda riders on his satellite LCR entry in sixth, with factory pair Marc Marquez and Dani Pedrosa ninth and 13th.

While Lowes is spending this test on last year's Aprilia, Aleix Espargaro was 15th fastest on its bike with a heavily-revised engine.

Pol Espargaro was the best of the new KTMs, one spot behind his brother with a 2m01.338s that was 1.657s off Stoner's pace, while Bradley Smith wound up 27th and the last of the runners, 3.353s adrift. 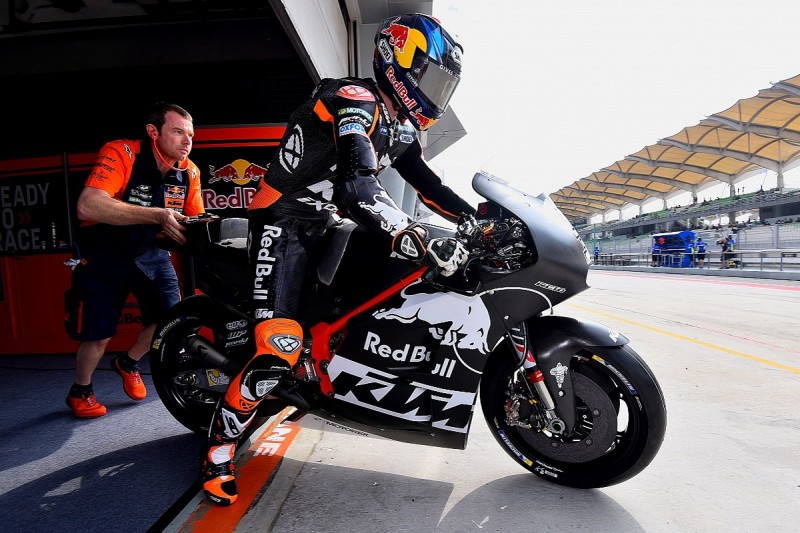 Two unnamed riders sampled the system in which existing tyre sensors inside the rim track the fitted compound, complemented by a check of its barcode by a technician.

The information is then displayed on the bike's dashboard, and relayed through the timing system when a rider crosses the first timing point, with promoter Dorna expected to incorporate that data into broadcasts.

The same compounds are on offer for the rear with a casing used in 2016, while an additional medium uses a new construction trialled during last November's Jerez running.