Crutchlow claimed his second MotoGP victory in the space of six races, following his Brno breakthrough in August, with a commanding win on Sunday.

The British rider struggled early this year with the change to Michelin tyres and control electronics, the latter amplifying Honda's acceleration deficit, and crashed in four of the first five races.

However, he has been in career-best form in recent months, and Crutchlow said Phillip Island had been marked in his calendar.

"There's no doubt I'm in a good moment in my career," he said.

"I said that three or four races ago and it seems to be getting better, which is good.

"I targeted a few races this year. Honestly, I said I wanted to do a good job and be on the podium at Brno.

"I said I wanted to be on the podium at Silverstone, and I was, and I targeted here to win, and I did.

"Somebody asked me last week what I thought about going to Phillip Island and I said I planned to come and win.

"I don't think they believed me, but I honestly did. I planned to come here and do a good job.

"It's nice to win one in the wet [at Brno] and the dry, because people think you can only ride in the rain when you win in the rain." 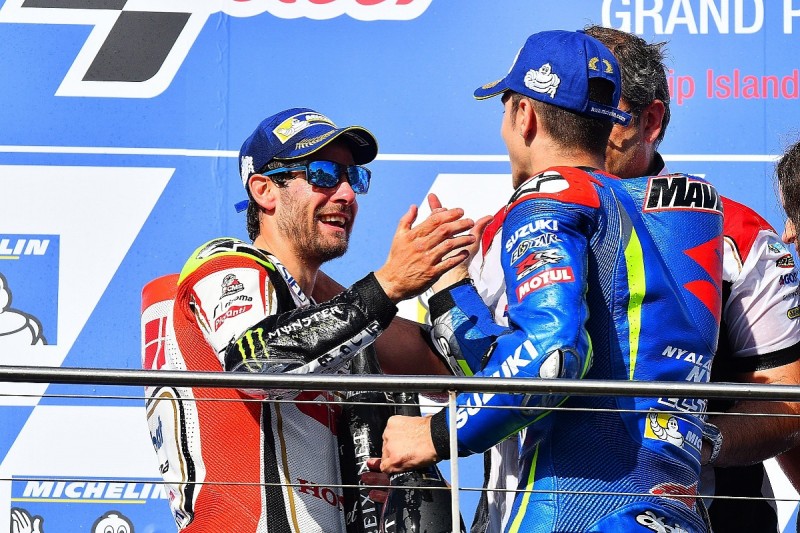 Crutchlow was 18th in the standings after crashing out of the Dutch TT in June, the eighth race of the season, but has risen to sixth in the points in the eight races since.

Only new champion Marc Marquez with 128 points has scored more than Crutchlow's haul of 121 in that time.

The 30-year-old has run an updated Honda frame since his home grand prix at Silverstone in September, which he says is a factor.

"I changed the chassis in the Brno test, which was after my first win," he said.

"I felt strong at Silverstone and the races after. It just suits my style a little better, but I also have a disadvantage in one area.

"I'm just riding in a good way. Sure I don't have a full factory bike but it's very close.

"We know that Marc is riding in a different way to me, he has the bike set-up in a little bit of a different way, but essentially they are similar bikes."

Valentino Rossi could stay in MotoGP beyond 2018 - Yamaha