The Briton won a pair of races with the LCR satellite squad in 2016, as factory rider Marc Marquez won his third title in four seasons.

Honda's RC213V remained a challenge to ride, though, particularly as the Japanese manufacturer struggled to pair its engine with the new-for-2016 control electronics.

Testing with its 2017 engine started late last year, the change headlined by a revised firing order to the 'big-bang' configuration from the 'screamer' sequence.

Following the winter testing ban, Malaysian Grand Prix venue Sepang will host the first of three pre-season tests from January 30, but Crutchlow is in the dark on what he will have to try.

"There's many things that I felt we could improve and they did quite a lot last year, if you compare where we were in the Malaysia test to where Marc ended up winning the championship," Crutchlow told Autosport.

"I believe that they know what they're doing. We have great knowledge in there, it's just putting it all together and building a bike that everybody can ride.

"I think they'll do that in the end, but whether it will be this year, I don't know.

"Sure, I know some sort of plan that they're doing, but we'll have to see what they bring to the Malaysia test.

"We know the Malaysia test is not going to be final, it will be more towards Qatar [venue of the final test and first race]."

Crutchlow felt Honda's 2016 bike was the toughest he has ridden in the premier class, and after testing upgrades at Valencia last November says he has stayed out of the process since.

"I've always had a really close relationship with the technical people in Honda," he added.

"But I've left them to it. I've given them the information, there's nothing more I could've done last year.

"They know the direction that I feel to go in, but I'm not the guy pulling the main strings.

"I think the other riders have a similar feeling, but we have differences in one way or another.

"I keep close contact with the engineering team of Honda, of course, but they're too busy.

"I've given them everything they needed and so did Marc and I think so did Dani [Pedrosa]."

Crutchlow was presented with the the Royal Automobile Club's Torrens Trophy in London on Tuesday.

The award, given out when the RAC feels a rider merits it rather than annually, is for those showing "outstanding skill in international motorcycling sporting events". 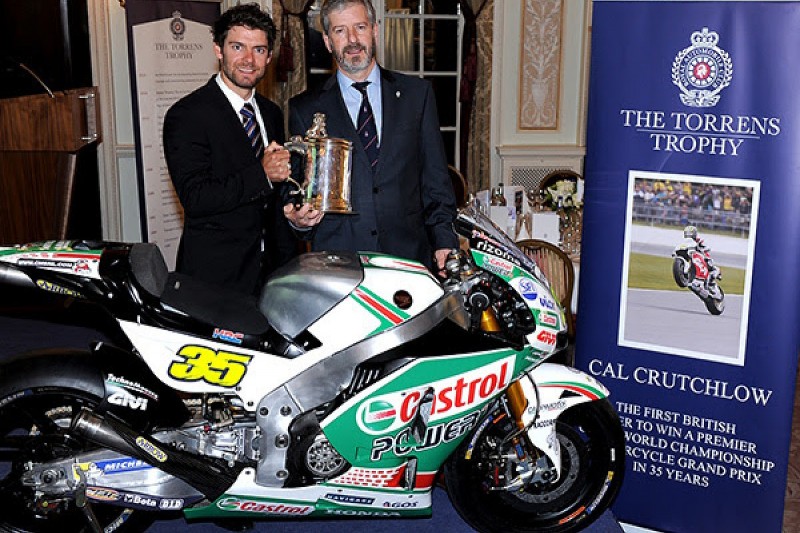